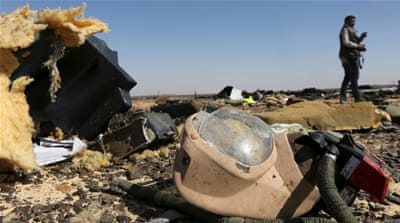 British and US officials say they have information suggesting the Russian jetliner that crashed in Egypt’s Sinai Peninsula may have been brought down by a bomb.

British Foreign Secretary Philip Hammond said on Wednesday that there was a “significant possibility” the crash was caused by a bomb, and Britain was suspending flights to and from the Red Sea resort of Sharm el-Sheikh indefinitely.

After a meeting of the British government’s crisis committee, COBRA, Hammond said Britain was advising its citizens not to go on vacation to Sharm el-Sheikh, which is visited by hundreds of thousands of Britons a year.

Intercepted communications played a role in the tentative conclusion that the Islamic State of Iraq and the Levant (ISIL) group’s Sinai affiliate planted an explosive device on the plane, a US official briefed on the matter told Associated Press. He spoke on condition of anonymity because he wasn’t authorised to discuss intelligence matters publicly.

The US and British security sources, however, stressed they had reached no final conclusions about the crash, as forensic evidence from the blast site, including the airplane’s black box, was still being analysed.

Meanwhile, Russian and Egyptian investigators said that the cockpit voice recorder of the Metrojet Airbus A321-200 had suffered substantial damage in the weekend crash that killed 224 people.

Information from the flight data recorder has been successfully copied and handed over to investigators, the Russians added.

ISIL, which controls swaths of Iraq and Syria and is battling the Egyptian army in the Sinai Peninsula, said again on Wednesday it brought down the airplane.

Remarks earlier on Wednesday by British Prime Minister David Cameron of concerns “the plane may well have been brought down by an explosive device” drew criticism from Egyptian Foreign Minister Sameh Shoukry.

He told CNN he was “somewhat surprised” by the British statement.

“This is a matter for the investigation to clarify and we should not prejudge or take any measures that might have implications,” Shoukry said.

A Russian aviation source told the Reuters news agency that the investigation into the crash is looking into the possibility of an object stowed on board causing the disaster.

“There are two versions now under consideration: something stowed inside [the plane] and a technical fault,” the source said.

“But the airplane could not just break apart in the air – there should be some action. A rocket is unlikely as there are no signs of that.”

Egypt, a close ally of the US and the most populous Arab country, dismissed a similar claim of responsibility for the crash by ISIL on Saturday.

The ISIL affiliate in the Sinai says it downed the plane because of Russia’s recent military intervention in Syria.

Both Egypt and Russia have dismissed the group’s claim of responsibility, with the Egyptian president calling it “propaganda”.

The suspension of flights is a further blow to Egypt’s troubled tourism industry, which has suffered in the unrest that followed the 2011 Arab Spring.

Several airlines, including Lufthansa and Air France, stopped flying over Sinai after the crash.

The Irish Aviation Authority followed the British lead and directed Irish airlines to suspend flights to Sharm el-Sheikh Airport and into the airspace of the Sinai Peninsula “until further notice”.