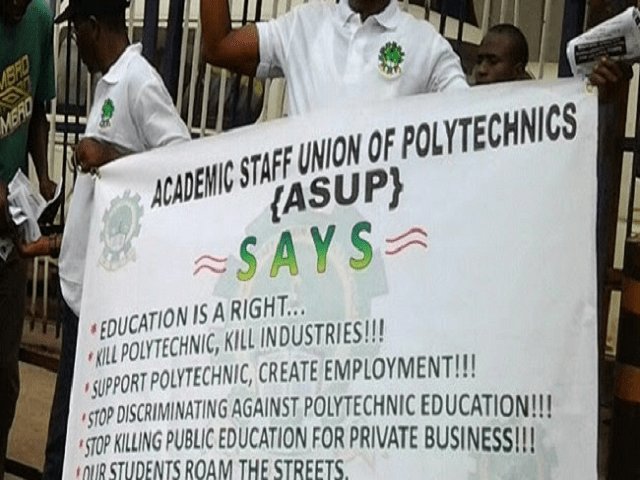 The nationwide strike embarked upon by the Academic Staff Union of Polytechnics (ASUP) has been suspended.

It had embarked on nationwide strike over failure of the government to meet its demands.

The suspension was made known by the National chairman of ASUP, Usman Dutse, at a P‎ress Conference in Bauchi on Wednesday.

He said that the union decided to suspend the strike after reaching an agreement and signing a Memorandum of Settlement and Action with the federal government.

It should be noted that ASUP had on 13th November 2017 embarked on an indefinite nationwide strike to press home their demands.

Other stakeholders involved in the negotiations, according to him are the National Salaries and Wages Commission, Budget office of the federation, the office of Head of Civil service and office of the Secretary to the Government of the Federation.

Dutse said: “Following these meetings, a Memorandum of Settlements and action (MoS) was agreed to by the government and the union on each of the issues in dispute.”

Dutse further informed that‎ the MoS was signed by both government and the union to resolve the issues at stake.

“While we are not unaware of the government over the years to willfully renege on agreements of this nature with labour unions including ours, it is the considered view of our union that the contents of this MoS be given a chance of implementation particularly as there is a mechanism for monitoring and evaluation embedded in the MoS”,  he concluded.