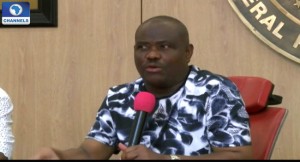 Governor Nyesom Wike of Rivers State says the State Commissioner of Police has withdrawn majority of policemen providing security for him.

The alleged withdrawal of security aides is coming just as the state is preparing to hold its legislative election re-run on December 10.

Governor Wike gave a hint of the withdrawal while flagging off the reconstruction of the Igbo-Etche Road on Friday.

He claimed it was a deliberate security infraction orchestrated to intimidate him, but also expressed confidence that it would not succeed.

The Governor said: “As I speak with you, the Commissioner of Police has withdrawn the security around me. It is God that will protect me.

“As a governor, the Commissioner of Police has the effrontery to withdraw my security. There is no limit to this kind of intimidation and impunity”.

He said despite the assault by the Commissioner of Police and the Security Agencies, nobody in Rivers State would be intimidated by the political antics of the police.

The governor informed the gathering that he had intercepted the security manual for the election to be used by Rivers State Police Command.

According to him, “the Rivers State Police Command will deploy policemen in a manner that APC leaders in the state will have access to disproportionate number of policemen on election day”.

He noted that on the average, the police command will attach at least 15 policemen to one APC leader, for the purpose of intimidation and theft of electoral materials.

Governor Wike further claimed that some of the policemen would also be used by the Independent National Electoral commission (INEC) to divert election materials to the home of APC leaders for electoral fraud.

He advised the Rivers State Police Commissioner not to allow APC leaders to mislead him into committing electoral fraud.

He also warned the police commissioner against indiscriminate arrests being proposed by APC leaders on the premise of frivolous petitions.

The Governor Also told youths in the state to protect their votes and the mandate of the people, despite the planned deployment of security personnel for illegal electoral purposes.

He assured the Etche Ethnic Nationality that the time had come for massive developmental interventions in the area.

Meanwhile the Rivers State Commissioner of Police, Mr Francis Odesanya, has denied withdrawing Governor Wike’s security aides, saying the Governor had over 200 policemen attached to him

He expressed shock over the claims of the governor and told Channels Television’s correspondent Emmanuel Ereyi, that the appropriate channel of complaint was not used, which according to him, was the Inspector General of Police.

Mr Odesanya highlighted that it was beyond his office to withdraw the security details of the governor.

“How can the governor say that kind of thing? Can the governor’s security details be removed by a commissioner? The man has over 200 policemen attached to him and not a single soul has been removed.

“The governor even recently requested for more which had been sent to him. How can he choose a rally or the flag-off of the reconstruction of a road to make such comments? The appropriate channel is to write to the inspector general of police or the president. Please I am here to do police work not politics,” he added.

Evidence emerges of mass burials in Kano after Arbaeen massacre