A Federal High Court in Abuja presided over by Justice Okon Abang has dismissed a suit filed by Miyetti Allah Kautal Hore.

The suit is challenging and seeking to restrain the 2017 Open Grazing Prohibition and Establishment Law passed by the Benue State House of Assembly. 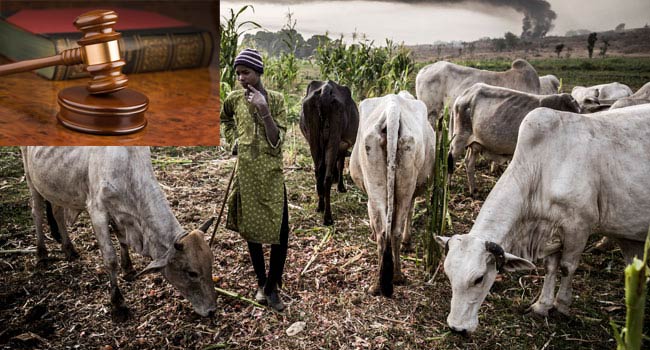 The court, on Thursday, also awarded a cost of N100, 000 against the plaintiff to be paid to all the 14 defendants before any other step can be taken in the suit.

Justice Abang predicated his decision on the failure of the plaintiff to comply with an earlier order of the court delivered 19 months ago directing them to file an amended originating summons.

The Benue State government on November 1, 2017 officially effected its ban on open grazing throughout the state.

This was after Governor Samuel Ortom on May 22, signed the anti-open grazing and anti-kidnapping, abduction, cultism and terrorism bills into law.

According to the governor, the anti-grazing law would put to an end to incessant clashes between herdsmen and farmers in Benue State.

He lamented the destruction of lives and property in clashes involving farmers and herdsmen over the years, and promised to promote ranching since it had proved to be the best way of rearing livestock globally.

Breaking: Another lady Narrates How COZA Pastor Fatoyinbo Raped Her