The Independent National Electoral Commission (INEC) has announced that it will comply with court order and include the All Progressives Congress [APC] in the governorship, national and state assembly elections in Zamfara State.

INEC announced this in a statement on Friday signed by its National Commissioner and Chairman, Voter Education Committee, Mr Festus Okoye.

The electoral body took the decision following a ruling delivered on Thursday by the Court of Appeal sitting in Abuja.

According to Okoye, the commission had refused to allow the candidates of the party in Zamfara to participate in the polls because of the “conflicting orders” of the Federal High Court, Abuja and the Zamfara State High Court on the primaries conducted in the state.

He noted, however, that the electoral umpire has decided to comply with the order of the court and restored the APC on the ballot in Zamfara.

Read the full statement below: 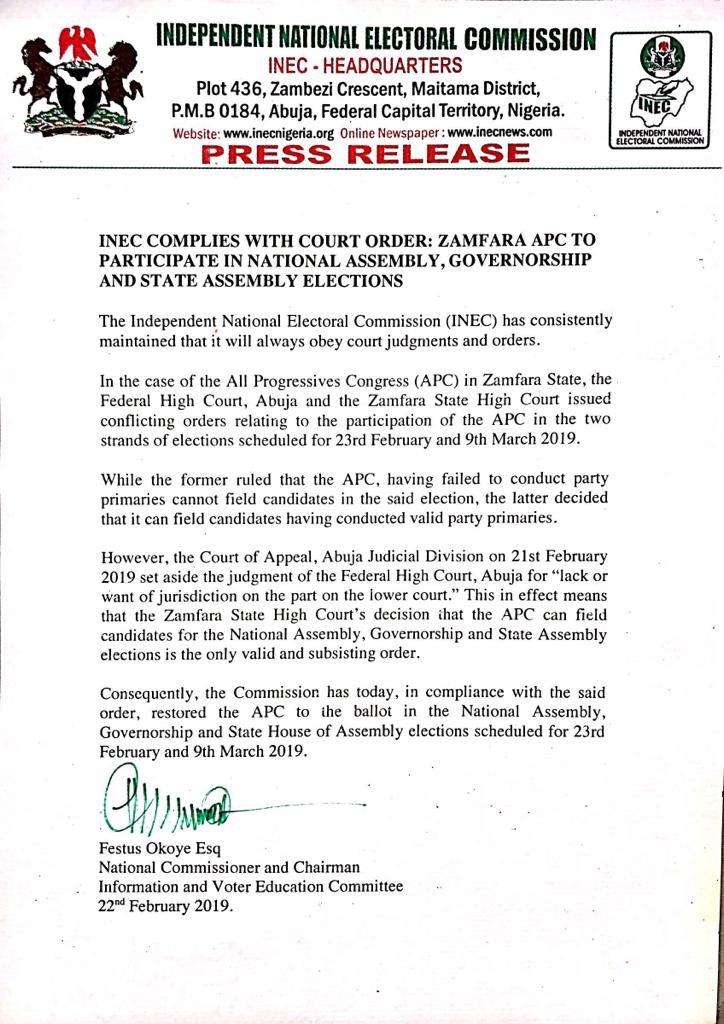 The court in Abuja had restrained the party from fielding candidates in the general elections, stating that it did not conduct primaries.

In another ruling, meanwhile, the court in Zamfara cleared the APC to go ahead and participate in the polls having held valid primaries.

The appellate court, thereafter, set aside the judgement of the Federal High Court, Abuja for lack of jurisdiction.

The ruling party also suffered a similar fate in Rivers State where the Supreme Court had to intervene and upheld that APC should not field candidates in the state.

Elections: Army Is Professional, We Must Support Them —HURIWA