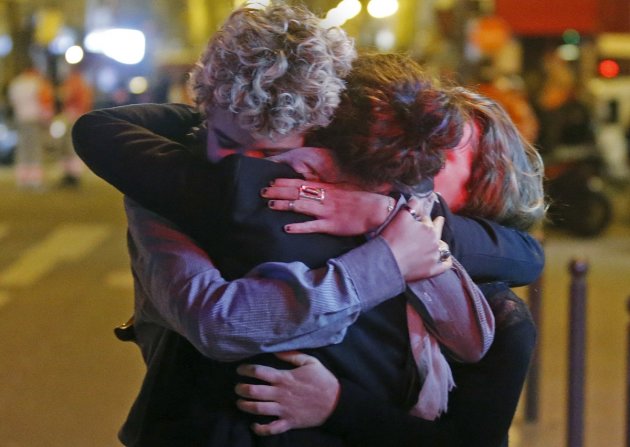 In a statement published online, the jihadist group said the attacks were designed to show France it remained a “top target”.

The massacre of over 150 people in Paris is thus a chilling reminder of a threat issued by the Islamic State (Isis) early this year to “fill the streets of Paris with dead bodies”. That threat, released by the terror group in July, came in a video showing a militant shooting a Syrian army prisoner.

Paris police have placed a temporary ban on demonstrations in the city and surrounding areas until Thursday. Transport safety measures will also be implemented across the country following the Paris attacks, the agency reports.

The isis claim was issued in written format in French and Arabic, and in audio format, all via established IS channels, according to the BBC’s jihadist media expert Peter King.

The statement claims that “eight brothers wearing explosive vests and assault rifles targeted carefully chosen locations in the heart of the French capital”.

It goes on to call Paris the “capital of abomination and perversion”.

“In a holy attack facilitated by Allah, a group of believers and soldiers of the caliphate – may Allah give it might and victory – targeted the capital of abomination and perversion, the one that carries the banner of the cross in Europe, Paris.”

Writing on International Business Times Saturday, Jayalakshmi K said the previous ISIS warning message was addressed to the French, the international community and “everyone who fights Allah and his prophet,” proclaiming that the Islamic State loves death “like you love life.” It followed the publication of the militant group’s French-language propaganda magazine in which the group called upon Muslims to emulate Yassin Salhi, the van driver who carried out a horrific attack near Lyon, France. While not claiming responsibility for the attack, IS encouraged individuals to “hit the interests of the enemies of Allah”.

Earlier in March, a spokesperson of IS militants, Abu Mohammad al-Adnan, had said in a video: “We — with Allah’s help — want Paris, before Rome and Islamic Iberia and after we blow up the White House, Big Ben, and the Eiffel Tower before Paris, and Rome.”

This was after the Charlie Hebdo killings in the first week of January when the French capital came under three days of terror attack after gunmen killed 12 of the satirical magazine’s staff. Police eventually caught the brothers behind the attack but more hostage dramas and shootouts left a few more dead.

Another message issued in November 2014 called for attacks on France saying: “Terrorise them and do not allow them to sleep due to fear and horror. There are weapons and cars available and targets ready to be hit. Even poison is available, so poison the water and food of at least one of the enemies of Allah. Kill them and spit in their faces and run over them with your cars. Do whatever you are able to do in order to humiliate them, for they deserve only this.”

The Charlie Hebdo massacre in January came after weeks of warnings from officials that the terror threat had risen to unprecedented levels. One of the reasons has been the emergence of jihadist safe havens in Syria and Iraq. France’s open-border policy has attracted a number of refugees from the Middle East and North Africa and government estimates say around 1,573 French nationals are implicated in terrorist networks. Many are fighting with jihadist groups in Syria and Iraq.

Despite tough anti-terror legislation, France has found it difficult to tackle terror given the emergence of strong support for IS among immigrant communities in city suburbs, following radicalisation of its society. Global risk consultancy groups like Aon and Verisk Maplecroft have warned that Europe and in particular France, Germany, Ireland, Denmark, Norway, Belgium and Estonia are vulnerable to attacks from IS and other Islamist groups.