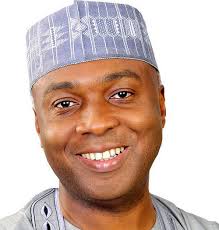 The Nigerian senate on resumption of plenary after its annual recess on Tuesday 29th September, 2015 passed a Vote on Confidence on its incumbent leadership as led by the Senate President, Dr. Abubakar Bukola Saraki.

The Senators had in a motion moved by Senator David Umaru who represents Niger East Senatorial District, seconded by former governor of Zamfara State and Senator representing Zamfara Central Senatorial District, Senator Ahmed Sani and overwhelmingly supported by 82 others passed the Vote of Confidence.

It however did not go without a little hitch as a Senator from Osun East, Babajide Omoworare who chairs the Senate Committee on Rules and Business raised that he would like to withdraw his name from the list and Senator Kabiru Marafa disrupting proceeedings till he walked out of the Floor while Senators debated the motion which was subsequently passed with the overwhelming support of Senators present.

The vote of confidence was passed on Saraki just as the Senate resumed from its six weeks holiday.

However, when Senator Kabiru Marafa (Zamfara Central) raised a point of order, Saraki refused to recognize him. The red chamber became rowdy afterwards for the next 30 minutes. Marafa subsequently left the chamber in apparent protest.

The vote of confidence comes after the arraignment of Saraki before the Code of Conduct Tribunal for alleged false declaration of assets last week. The Senate president was alleged to have committed the offence 12 years ago when he was the governor of Kwara State.

This is an improvement in the performance ratings of the Senate leadership as about 81 Senators had earlier done such a few months ago with Senators rising beyond their political affiliations to support the leadership of Senator Bukola Saraki without a dissenting voice.