One of the four injured policemen beaten up by Shi’ites protesters during a violent invasion of the National Assembly, Umar Abdulahi, a Sergeant, has died. 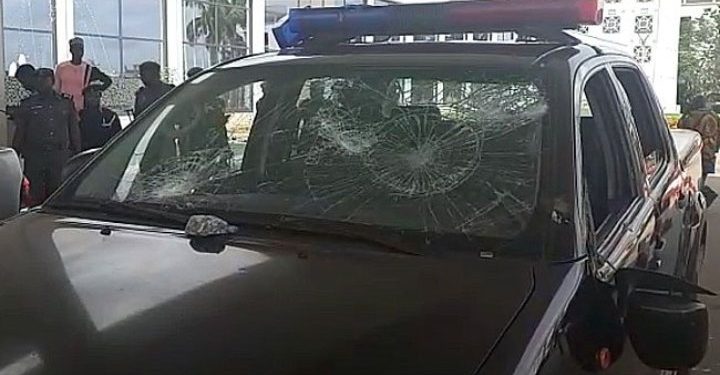 The others include the DPO, who was stabbed in the arm and two others.

One of them, it was learnt, was shot one on the side (rib) and the other on the thigh.

The two suspected Shii’te supporters involved in the attack are still being interrogated in the DSS office as at the time of filing this report.

The two however maintained their innocence that they were officially cleared to access the NASS.

The FCT Police Command said nine of its personnel sustained injuries when members of the El-Zakzakky Islamic Movement of Nigeria popularly called Shi’ite forcefully invaded the National Assembly on Tuesday.

Two of the Policemen were shot while seven others were injured with stones and other objects.

The Police however said 40 members of the group have been arrested for the various roles they played during the protest.

The Commissioner of Police in charge of FCT, CP Bala Ciroma, in a statement in Abuja explained the protesters started in a peaceful procession.

Elombah News has reported that Nigeria’s National Assembly was on lockdown on Tuesday afternoon after shots were fired outside during clashes between police and a group of Shi’ite Muslim protesters, Reuters witnesses said.

It was not immediately clear who had fired the shots or whether anyone had been injured, the witnesses said. Police used tear gas against the protesters, and smoke could be seen coming from the area, they said.

State news channel NTA said protesters with the Islamic Movement of Nigeria (IMN), a group that represents Nigeria’s minority Shi’ite Muslims, had tried to enter the complex, sparking the confrontation with police.

Members of the IMN group have protested regularly outside the National Assembly, calling for the release of their leader, Ibrahim Zakzaky, who has been in detention since 2015.

Busted! Buhari’s Many Lies About His Academic Qualifications [VIDEO]