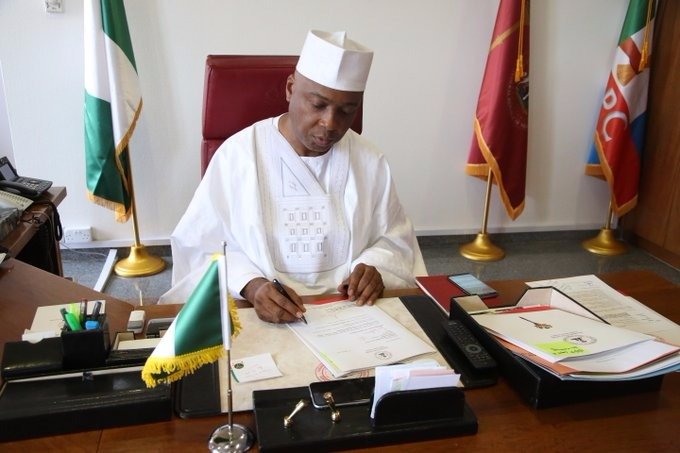 Senate President Bukola Saraki has just signed the Nigerian Senate’s notice to the Executive on the confirmation of Chief Justice Walter Onnoghen. Findings showed that the late Justice Ayo Irikefe was the last southerner on the seat who retired in 1987.

President Muhammadu Buhari had on November 10, 2016, appointed Justice Walter Onnoghen as Acting CJN, being the most senior Judge following the retirement of Justice Mahmud Mohammed.

However, despite pressure from well-meaning Nigerians, President Buhari did not forward Onnoghen’s name to the Senate as required by law till he left the country on vacation that has turned out to be indefinite.

The letter was read by Senate President, Bukola Saraki on February 21 and confirmation hearing was fixed to March 1.

He graduated from the University of Ghana at Legon, Ghana in 1977 and from the Nigerian Law School in Lagos in 1978.

Before joining the Supreme Court, he was a judge in Cross River State and a justice of the Court of Appeal.

He is currently the Chief Justice of Nigeria Supreme Court from 10th November, 2016 to date.

Justice Onnoghen was appointed as the Chief Justice of Nigeria by the Nigerian Senate President of Nigeria on the 7th February, 2017.

He was finally confirmed the substantial Chief Justice of Nigeria on March 1, 2017 by the President of the Nigerian Senate.