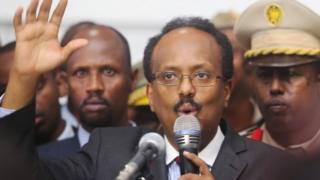 Somalia has a new president. He is Mohamed Abdullahi Farmajo. He was declared winner today after beating rivals in the second round of vote.

He got 184 votes, to beat incumbent Hassan Sheikh, who had 97 and Sheikh Shariff, 46. Farmajo, a former Prime Minister was immediately sworn in.

Incumbent Hassan Sheikh Mohamud conceded just when the process was about to enter a final round. His victory means Somalia maintains the culture of electing a new President at each election. Hassan Sheikh won the first round of votes which saw the original number of 21 candidates pruned to four. Out of that number, PM Sharmake also dropped out citing interference in the process. he however tasked electors to vote for change.

Special Representative of the African Union has congratulated Farmajo on his election. Ambassador Madeira reaffirmed AU’s commitment to working with him, the government and people of Somalia.

He also applauded the outgoing president for conceding defeat leading to a peaceful transfer of power in the strife torn country.

Farmajo once served as a prime minister for less than a year before he was forced to resign under a deal supported by the population who protested when he refused initially.