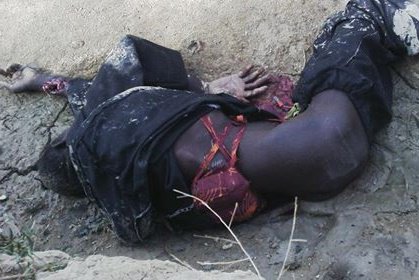 Today at about 6.30am, troops of Operation LAFIYA DOLE intercepted and neutralized a male suicide bomber at the outskirts of Maiduguri, Borno State.

This was made know to newsmen by the Acting Director Army Public Relations, Colonel Sani Kukasheka Usman.

According to Colonel Usman, the terrorist attempted to infiltrate through the troops forward defences at Jidari Polo general area.

He had come in through Alidawari village about 4 kilometres ahead of Jidari strapped with heavy Improvised Explosive Devices (IEDs) vest.

The vigilant troops on sighting him laid in wait for the intruder when vehemently refused to stop despite several warnings and challenges.

A marksman then neutralized the bomber.