Barely 2 hours into the crucial meeting of The South-East & South-South Governors holding at Nigerians Lake Resort Enugu, Gov. Ifeanyi Ugwuanyi of Enugu state has uncovered a clandestine attempt to evedrop on the closed door meeting being held by the Governors as a samsung phone was left on record throughout the course of the meeting. 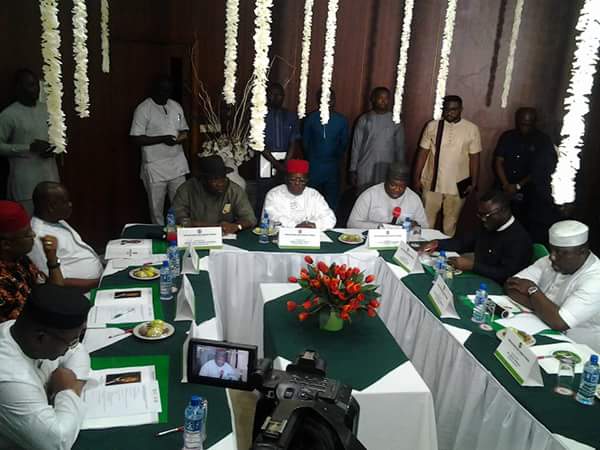 Faced with the threat of Nnamdi Kanu and his IPOB, South East/ South South Governors meet at Nike lake Resort, Enugu. It is the first of it kind; never in the history of Nigeria has this type of togetherness been experienced.

Its objectives are for regional integration, peace and unity of the entire country.

This discovery deeply worried the host Governor as he asked his security details who had deliberately left a samsung phone on record while such a sensitive meeting was going on. Could anyone have been listening from another end? What could be the motive?

Speculations over what the Governors were to discuss and deliberate about have taken over the media State since the announcement of this meeting which last took place in 2013 when only Rochas Okorocha was the only serving Governor amongst these group.

The furious Governor held on to the phone and insisted to get to the bottom of it, so as to determine what the person has already heard and the motive of the person also. But The underlying question to answer is who could be spying on the SE/SS Governors?

How Abacha Poisoned Yar’Adua, And How I Escaped — Obasanjo