Brexit: Jeremy Corbyn confirms Labour will back to remain in 2nd referendum

Jeremy Corbyn confirms Labour will back remain in a second referendum

BREAKING: Jeremy Corbyn announces Labour’s Brexit position. Says new PM “should have the confidence to put their deal, or No Deal, back to the people in a public vote” – and Labour would then campaign for Remain, “against either No Deal or a Tory deal”. 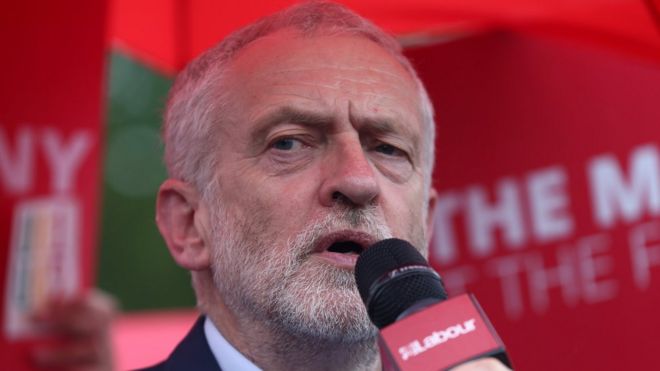 Jeremy Corbyn has confirmed that the Labour party will campaign for remain in a referendum “against no deal or a Tory deal”.

On Tuesday morning, the leader of the Labour Party, convened a meeting of the party’s shadow cabinet to agree a settled Brexit position.

The party’s leader, Jeremy Corbyn, has faced calls to move policy in a more pro-EU direction.

On Monday, trade union leaders backed a referendum on any deal agreed by the Tory government or a no-deal exit from the EU.

They are now calling for Remain to be on the ballot and expect Labour to support that option.

If Labour wins power in a general election, they want a “confirmatory vote” on any new deal negotiated.

However, Labour’s stance in a referendum campaign in these circumstances would “depend on the deal negotiated”.

Mr Corbyn has previously said he would consult the unions before making any shift in Labour policy.

AFCON 2019: VAR To Be Used From Quarter-Finals

EXPLOSIVE! How Russia ‘groomed’ Trump 40yrs, saved him from financial…