Brexit: Theresa May to trigger Article 50 by end of March 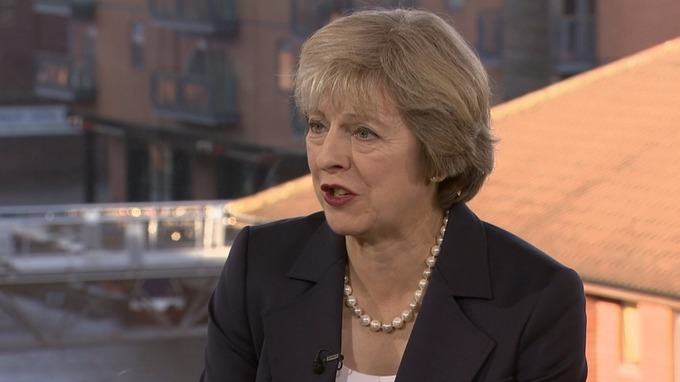 UK Prime Minister Theresa May will propose a bill to repeal the EU Act by next spring thus formally begining the Brexit process by the end of March 2017, she has told the BBC.

The PM’s announcement on triggering Article 50 of the Lisbon Treaty – which begins the formal negotiation process – means the UK looks set to leave the EU by the end of March 2019.

Mrs May also promised a bill to remove the European Communities Act 1972 from the statute book.

She said this would make the UK an “independent, sovereign nation”.

The repeal of the 1972 Act will not take effect until the UK leaves the EU under Article 50.

It will be contained in a “Great Repeal Bill”, promised in the next Queen’s Speech, which will also enshrine all existing EU law into British law.

This will allow the government to seek to amend or cancel any legislation once Brexit has been completed.

The repeal bill will also end the jurisdiction of the European Court of Justice in the UK.

Brexit campaigners have been calling for Article 50 – which begins a two-year negotiation process – to be triggered as soon as possible.

Mrs May, who had previously only said she would not trigger it this year, will be making a speech on Brexit later to the Conservative conference, which is getting under way in Birmingham.

Speaking on the Andrew Marr Show, she ended speculation about the government’s timetable, saying this would be done by “the first quarter of 2017”.

Mrs May said the process of leaving would be “quite complex” but said she hoped there would now be “preparatory work” with the remaining EU members so that “once the trigger comes we will have a smoother process of negotiation”.

She added: “It’s not just important for the UK, but important for Europe as a whole that we’re able to do this in the best possible way so we have the least disruption for businesses, and when we leave the EU we have a smooth transition from the EU.”

The PM also said June’s vote to leave the EU was a “clear message from the British people that they want us to control movement of people coming into the UK”.

BBC assistant political editor Norman Smith said Mrs May was sending out a signal to say she is “not hanging around” on Brexit.

But she had offered little more detail on the “key issues” of single market access and immigration, he added.

In 1972 the UK Parliament passed the European Communities Act

It gave direct effect to EU law, so if there is a conflict between an act of the UK Parliament and EU law, Westminster loses out and EU law prevails

The European Court of Justice (ECJ) became a kind of Supreme Court of Europe, interpreting EU law with judgements that were binding on all member states

“You don’t say exactly what you are going to negotiate on, but once negotiations are concluded we will say what we’ve achieved and how we’ve achieved it,” he said.

Mrs May and Brexit Secretary David Davis will give more details of the Great Repeal Bill – which Brexit campaigners have been calling for – to conference delegates later.

Mrs May said converting Brussels regulations into domestic law would give Parliament the power to unpick the laws it wants to keep, remove or amend at a later date.

The move is also designed to give certainty to businesses and protection for workers’ rights that are part of EU law.

In an earlier interview with the Sunday Times, the prime minister said the repeal bill would mark “the first stage in the UK becoming a sovereign and independent country once again”.

“It will return power and authority to the elected institutions of our country,” she said.

“It means that the authority of EU law in Britain will end.”

Mrs May has also made it clear she does not want the party conference to be dominated by the issue of leaving the EU.

Tory MPs are divided between favouring a “hard Brexit” outside of the European single market to obtain complete control over immigration, or a “soft Brexit” where the UK remains in the free trade zone, but potentially has to comply with some EU rules.

“As car manufacturers have made clear, it is essential that the UK remains a member of the single market to protect investment and jobs.”

Mr Davis will tell the conference that employment rights “will not be eroded” on exiting the EU.

He will dismiss any suggestion that the government intends to use Brexit to roll back workers’ rights and will say that UK law goes further than the minimum standards offered under EU law, such as for annual and parental leave.

He will also say: “The moment we leave, Britain must be back in control.

“To ensure continuity, we will take a simple approach. EU law will be transposed into domestic law, wherever practical, on exit day.

“It will be for elected politicians here to make the changes to reflect the outcome of our negotiation and our exit.”