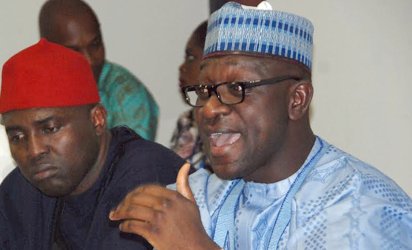 The suspended Member of the House of Representative and former Chairman of the House Committee on Appropriation, Abdulmumin Jibrin has promised Nigerians more shocking revelations.

The embattled Member said that he is yet to expose what he calls ‘systemic corruption’ in the House.

The former Appropriation Chairman made the remarks on Monday at a media conference with journalists, booth print and online, in Abuja.

He told newsmen that in his four years in the National Assembly, he had never seen where a standing Committee of the House on Education inserted 181 projects into the budget.

Jibrin said he will make more revelations on how members committed fraud during investigations as the days go by.

He held the conference to explain some issues regarding his allegations of corruption against principal officers of the House of Representatives.

“On the aspect of individual corruption and issues of corruption, I have given a lot of instances with allegations against the Speaker and some other members of the House of Representatives.

“Also, you can imagine, isn’t it ridiculous that 360 members, nobody has the internal budget of the house copies.

“There is nothing that we did not do with Dogara to release the internal budget of the House.

“These are facts. He should come out in light and just say Jibrin is lying.

“I have been saying this thing for eight weeks, he hasn’t come out to talk,” he told reporters.

Mr Jibrin also alleged that lawmakers had kept quiet over the issue because there was ‘systemic blackmail’.

“They have swallowed allowances. So you cannot talk, even though they are unhappy about the situation.

“The leadership always use that as a blackmail,” he claimed.

According to him, apart from the allegations already contained in his petition to anti-graft agencies, he would be speaking to the public in the days ahead about how some individuals in investigative committees commit corruption with their office.

The lawmaker also explained the reasons for not appearing before the Ethics Committee that recommended his suspension as well as those he indicted in his petitions to the anti-graft agencies.

Mr Jibrin was suspended on September 28 by the House after he failed to appear before the Ethics Committee.

He had demanded that the hearing should be put on live TV, saying that it was the condition that must be met before he would appear.

After his suspension for 180 sitting days and subsequent lockdown of his office, the lawmaker filed a suit against the Speaker of the House, Mr Yakubu Dogara.

He claimed that the forwarding of the issue to the Ethics Committee contravened the law, as there was a subsisting suit on the issue.

Reacting to his suspension, Mr Jibrin said that the decision was completely inconsequential‘.

“Whatever product comes out of that process, as far as I am concerned, is completely inconsequential and cannot stand anywhere.

“The matter is in court and it is a matter of litigation,” he told Channels Television.

He had accused Mr Dogara and some other lawmakers of padding the 2016 budget.

Mr Dogara had denied the allegation, but at one point told reporters that padding was not an offence.

Okorocha and the Douglas road refuse dump in Imo State