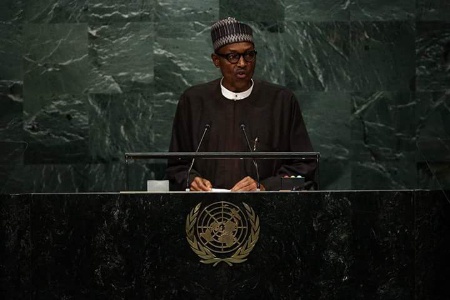 President Muhammadu Buhari has appealed to the international community not to further delay or downplay the need for humanitarian intervention in Nigeria’s North-East and the Lake Chad Basin.

“It is time for collective global action to invest in the people of Nigeria’s North-East and the Lake Chad Basin region,” the President told the High-Level Event on “The Humanitarian Crisis in the Lake Chad Basin: A Turning Point,” in New York, on the margins of the 71st Session of the United Nations General Assembly (UNGA71).

“We are renewing the call for re-dedicated international action to end the humanitarian needs of victims and address the root causes of terrorism itself,” he said at the event jointly-sponsored by the United Nations Office for the Coordination of Humanitarian Affairs, the African Union, the European Union and the Organization of Islamic Cooperation.

President Buhari noted that the “complexities and severity of humanitarian crisis across the world have increased in recent times, resulting in devastating repercussions.

“Political and socio-economic structures as well as the growth trajectory of many countries have been negatively affected leaving traumatized populations.

While commending the Multi-National Joint Task Force for degrading Boko Haram, he said that the Nigerian government has been fully responsive to the urgency to save innocent lives, protect victims of Boko Haram atrocities, guarantee stability and facilitate the resumption of normal social and economic activities in the North-East of the country.

“The Government of Nigeria is not overwhelmed by the enormity of this humanitarian challenge. Rather, we remain resolute in defeating terrorism in all its forms.

“We have put in place a robust people-driven counter-terrorism strategy built on a combination of revamped security operations and a human rights-based approach to help bring about rehabilitation, reintegration and reconstruction,” the President said.

According to him, “Nigeria has been providing food support, reintegrated healthcare, shelter, psycho-social support and access to water and sanitation amenities for those in need.

“We are also engaging highly respected community and religious leaders to discourage vulnerable youth from being radicalized.”

President Buhari expressed delight that displaced persons have begun to return to their communities in Konduga, Mafa, Benisheck and Ngala in the North-East.

On the missing Chibok schoolgirls, the President said that the unfortunate incident has remained in “our national consciousness.”

He added that the administration “is working hard to ensure the release of all Nigerians held captive by Boko Haram, including the Chibok girls.

“We are ready to ensure their swift rehabilitation, reintegration and the continuation of their studies once returned to their families.”

On the Lake Chad, President Buhari said the shrinking of the Lake has also like Boko Haram, adversely affected the communities around the Basin by increasing their hardship.

Given the enormous challenge posed by the dwindling waters, the President noted that no single State in the region can independently meet the needs of the victims of the depressing occurrence.

“Nigeria thus, reiterates its call for stronger international action and support for the implementation of the Lake Chad Development Resilience Action Plan,” he said.

He also urged “increased global attention and active engagement than it is currently receiving.”

President Buhari, who did not fail to appreciate the critical support the North-East and Lake Chad Basin have been receiving from the United Nations and development partners, pledged Nigeria’s preparedness to collaborate in order to “find a lasting solution to this human disaster.”