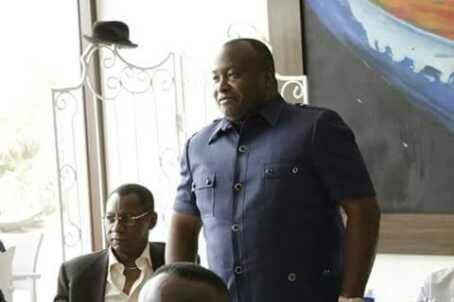 Chairman of Capital Oil & Gas Limited and proprietor of FC Ifeanyi Ubah Football club at the weekend revealed that a total debt of N10.9bn owed to him for an undetailed business of his company with the Federal Government, which fell due in 2012 has been reimbursed by the Federal Government under President Muhammadu Buhari.

Ubah who spoke in a 45th year post birthday interactive session with cross section of over 250 media practitioners in Anambra at his Nnewi Command House said:

“It is ironical, yet it is true that President Jonathan for who I worked in the 2015 Presidential Elections did not pay me my debt which had been there since 2012, because he was listening to Ngozi Okonjo –Iweala.

“Yet the government which I worked against has looked at that file and seen that it is genuine and have called me and paid me.

“I am grateful to President Buhari.”

He however urged President Buhari to address the issue of the security threats posed by some criminal-minded herdsmen and those disguising as herdsmen, because it is very sensitive to the South East.

Ubah came down heavily on the policies and operational modus of the Governor Willie Obiano-led Government of Anambra State.

He described Obiano as ‘a good man with very bad advisers’, who are leading the government astray.

He regretted that Anambra can be talking in terms of a governor taking away N1.4 billion monthly as security vote warning that ‘if it is true, it is not acceptable, given the limited funds accruing to the state.

While fielding questions from participants in the event, Ubah said that Anambra will draw greater benefits from Oil & Gas available in the state by building refinery and gas plant to process the natural resources than by hurrying to export raw crude.

Ubah was visibly elated by the 2-0 victory of his club Ifeanyi Ubah over visiting Uyo-based Akwa United.

He said his 38-hectare games village in Ozubulu embodying three stadia, eight practice pitches, a football academy and a five-star hotel among other facilities has so far gulped more money that the three unnecessary bridges of the Enugu Onitsha Express Way in Awka, which is money wasted.

Ubah however noted that ‘if he is made the Director General of Willie Obiano Second Term Campaign, he would seize the opportunity to reorganize Willie Obiano brand and get it ready for a second term.

This, according to him, is because the first term has been bridled with MOUs ( Memorandum of Understanding) ,but no practical steps to position Anambra State for growth.

This according to him has necessitated the harvest of all available stories to make it seem like there are successes where there is none.

Speaking on agriculture, he said that Anambra Rice is rice imported from India by a Nigerian company and re-bagged.

He described it as a scam, just like the orchestrated export of ugu and other vegetables to Europe to earn $5 billion is a bigger scam.

However, according to the businessman who enthused that he is a ‘good brand’, “if Obiano does not make me the Director General, I will contest the election on my own rights”.

Ubah also responded to one of the questions suggesting that businessmen should remain in business and leave the politicians and public servants to govern and mange polities.

He said all the past three mayors of New York, United States of America have been billionaires.