Buhari refuses to watch this video; the shooting of unarmed pro Biafra protesters 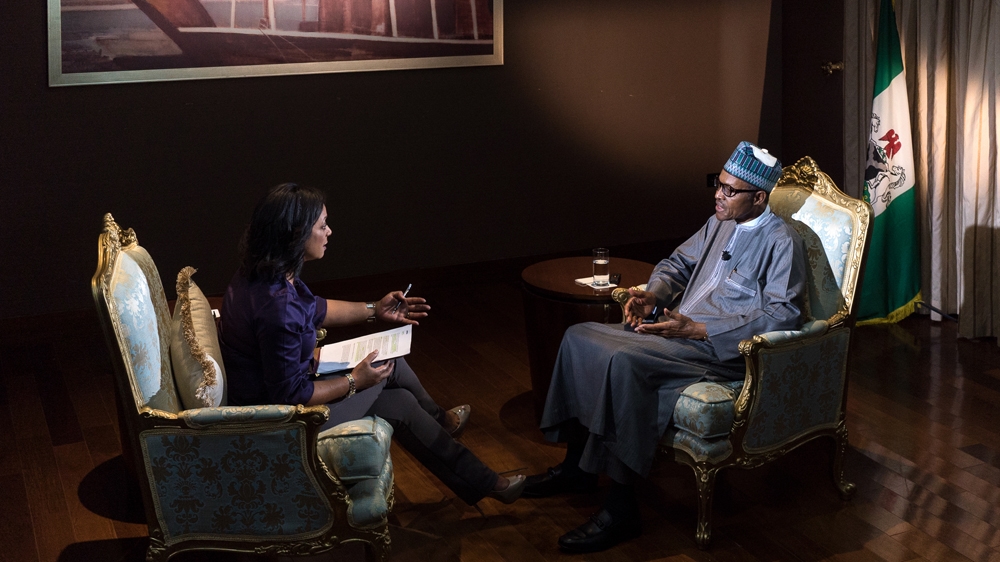 President Muhammadu Buhari was interviewed by Martine Dennis on Al Jazeera while he was in Qatar last week.

During the interview which Aljazeera broadcast on Sunday, Buhari refused to watch a video showing the shooting of unarmed pro-Biafra protesters.

The president spoke against the backdrop of the renewed agitation for the actuation of the republic of Biafra. Speaking to Aljazeera television during his last visit to Qatar, president Buhari recalled that over two million lives were lost during the Nigeria civil war between 1967 to 1970 on the demand of a Biafran state.

He was asked about the shooting of unarmed pro-Biafran protesters in Aba, Abia State on 9 February this year and Dennis suggested he could watch the video. But Buhari pointedly refused to watch and then said the pro-Biafrans “should not be joking with Nigerian security”.

The Biafran part of the interview came towards the end after another train-wreck of a performance from the president. Despite Dennis’s friendly disposition, unlike her Al Jazeera colleague Mehdi Hasan, who tore Buhari to shreds in an interview on the channel in October last year, the president continued to show why his dwindling band of supporters would cringe with embarrassment whenever he faces any interviewer that does more than toss him soft balls.

Watch the entire video of the Aljazeera interview below

President Mohammasu Buhari stated pointblank that Nigeria would not tolerate the state of Biafra.

He said “At least two millions Nigerians were killed in the Biafra war. And for somebody to wake up may be they weren’t born. Looking for Biafra after two millions people were killed, they are joking with the security and Nigeria won’t tolerate Biafra.”

Also speaking on the state of Nigerian economy and the pressure to devalue the Naira , president Buhari stated that Nigeria was prepared to go against the advice on International Monetary Fund, IMF in that regard.

He maintained that the devaluation of the Naira would not pay Nigeria, saying the country was purely an import nation. He also stated their despite the plummeting crude oil prices in the international market, it would pay Nigeria to remain in the Organization of Petroleum Exporting Countries, OPEC. “If it is against our national interest, why can’t we go against the IMF advice?”

Buhari asks. “We were unable to diversify our economy, hence we are much more disadvantaged by the lower oil prices.

Nigeria will make the necessary sacrifice to remain in OPEC”, he said.

Asked to comment on the anti-terrorism war, the president headed a sigh of relief that no local government area of Nigeria was under the control of the Boko haram insurgents as was the case when he assumed office in May 2015.

Watch the entire video of how Nigeria shot and killed pro-biafra protesters in Aba last month below:

EFCC Drags Tarfa, another SAN to Court over Bribery of Judges

ECREEE board adopts work programme for greater access to energy