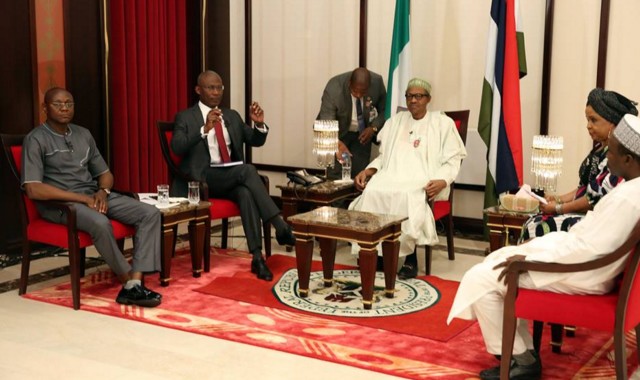 For me, an hour 50 minutes into the two-hour Media Chat was really the meat of the whole interview, when the Premium Times journalist asked the President about – DSS continued detention of persons freed by the courts, about Biafra’s agitation by young people, about his kitchen and lopsided appointments, about SE marginalization, etc.  His answers really made me sad. He did not speak like a head of state and loving leader but like an enemy, a hater and a dictator.

In 1983/84, during General Buhari’s military regime, Nigerians saw clearly that he was a brutal dictator – perhaps more brutal than General Abacha.   A brief review of the military rule showed how the Hausa-Fulani Oligarchy, the Sokoto Caliphate, the Kaduna Mafia and the Northern Jihadists reduced and rubbished Nigeria as a nation – especially the systemic marginalization of SE/SS.

And so, in December 1983, a palace coup takes place and Muhammad Buhari, a military general and a radical Islamic leader from the North ousts the incompetent Shehu Shagari, a school teacher also from the North of the Sokoto Caliphate. Buhari takes over the helm of affairs, accusing Shagari’s government of corruption and economic mismanagement, putting him only in house arrest, while the Southerners were put in prison (including Dr. Alex Ekwueme – one of Nigeria’s most honest leaders).  Other were exiled or executed.  A lot of Igbo business men and traders were executed for fathom drug trafficking charges.

On August, 1985,another palace coup took place, this time, Ibrahim Babangida, also another Northerner and Buhari’s Chief of Army staff , overthrows his boss and accused Buhari of being insensitive to the feelings of the Nigerian masses especially his ‘War against Indiscipline’ which was excessive and targeted to those who opposed him. Buhari was not even arrested. Ibrahim Babangida began his reign with a Structural Adjustment Programme (SAP) and market reforms that eventually destroyed the Nigerian currency and economy and created the culture of corruption we have today in Nigeria.

During IBB 8-year regime, there were two attempted coups – Mamma Vasta in April 1986 and Gideon Orkar on April 1990. Both coups failed and IBB managed to survive those two coups. He executed the coup plotters and imprisoned most of his critics.  The 1992 presidential election which was clearly won by Chief M. K. O Abiola was out rightly cancelled and the political maneuvering of that period eventually led to the compensation Chief Olusegun Obasanjo’s presidency again in 1999.

Fast forward today.  We have again, a military dictator – President Buhari as President of Nigeria – 30 years later.  This is insane.  Nigerian are either stupid, or hate themselves so much, or cursed as a nation.

Today, everyone is witnessing a president, who does not obey the judicial arm of the government.  Currently, he is at war with the legislative branch.  He’s singlehandedly ruling the nation.  Everyone is afraid of him because he has the full support of the Nigerian Army, Police, etc. – military personnel who do not understand their clear role in a democratic presidential system of government.

While campaigning in Akure – Ondo State on March 24, 2015, Nigeria’s former First lady, Dame Patience Jonathan, stated I quote: “that a vote for the APC presidential Candidate Gen. Muhammadu Buhari is a vote to send Nigerians to Prison. According to her, a dictator will always be a dictator no matter how his handlers white wash him. Nigerians should not make that mistake because a vote for Buhari is a vote to send people to Prison.”

Today, we are witnesses of these phenomena which none of our rapacious political leaders and false prophets saw coming.

Nigeria is a secular state, a democratic state and a 21st century nation.  In an age where nations are innovating and prospering by taking advantage of different talents, approaches, ways of thinking and life experiences, Nigeria is still stuck in old fashion and lopsided putative ways of thinking.  In an age of global prosperity and vast interaction of economic opportunities and cultures with enormous access to information and technology through the internet and various social media, making interdependence palpable; Nigeria is still wallowing in abject poverty with more than 70 million jobless youth.

Nigeria is under a full-blown dictatorship and if not handled courageously will definitely lead to anarchy.   Somalia, Rwanda, Burundi, Syria, etc. will be a child-play compared to what we are about to face if President Buhari does not retract his steps.

For me, I’m beginning to lose hope in Nigeria.  There is awful ethnic bias, hatred, religious intolerance, violence and corruption.  No nation can make progress when such phenomenon exists.  It can only be saved by divine intervention.

And so for me, Biafra or whatever new nation it’s called – is no longer a fantasy or dead as some have written, but a viable option, an alternative for freedom from under-development, tyranny, oppression, repression, bondage, slavery, hatred, violence, mayhem, brutality and systemic marginalization.  Biafra is now a sure part and clear vision for civilization, development, progress, prosperity, life, liberty and pursuit of happiness.   Biafra is the only hope for Easterners – SE/SS combined.

After-all it is Nigeria – an experiment, an amalgamation that expired in 2014, 100 years of faulty British experiment for colonial domination.

I’m very disappointed with President Buhari, who overwhelmingly won the trust of Nigerians because of his pedigree to fight corruption and bring the so-called Change and Hope he was preaching.  Instead of him to humbly focus on the urgent issues confronting the nation; he is embarking on polices of vendetta against Igbos and those that did not vote for him.

In the midst of a global economic uncertainty and financial crisis, instead of him to buckle-up so that Nigeria doesn’t run the risk of insurrection like the one going on in Middle-east or the famine in Somalia, he’s abusing the power entrusted upon him by most Nigerians to  punish his fellow citizens.

President Buhari/APC government must come up with economic agenda, laws, policies and strategies that can turn around the nation’s jobless economy, generate power sufficiency, improve infrastructure, improve security, and protect the lives and businesses of Nigerians around the country.

President Buhari, please release Mr. Nnamdi Kanu, Sheikh El-Zakzaky, and others being held by DSS on this first day of January, 2016, otherwise, history will not judge you and your administration well – unless, you are determined to lead Nigeria into lawlessness, hopelessness, and disintegration.   There is a Nigerian proverb that says, “All we do on earth, we will account for kneeling in heaven.” Let those who have ears, hear the Word of the Living God.

Happy New Year to All!  May 2016 bring God’s peace, favor, prosperity and goodwill to all!  Amen.

C. K. Ekeke, PhD., M.Div., is an author, consultant & leadership lecturer.  He is the president of Leadership Wisdom Institute.