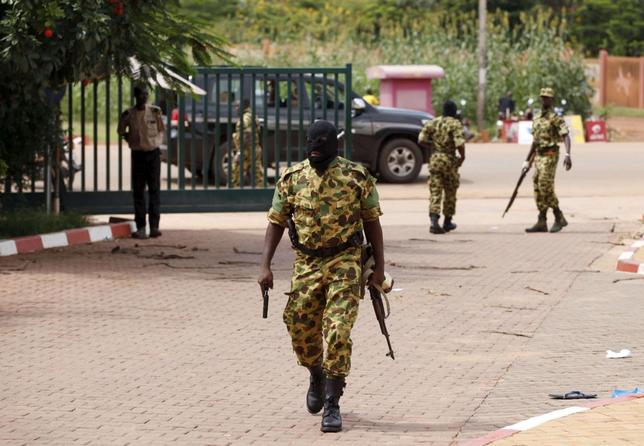 Burkina Faso’s army took up positions on Tuesday outside the presidential guard’s camp in the capital Ouagadougou, a day after the military chief of staff said the elite unit was refusing to disarm after a short-lived coup.

In a statement, the chief of staff called on the population of the West African capital to avoid the Ouaga 2000 district, where the camp is located, close to the presidency, and for residents of the neighbourhood to remain indoors.

In a separate statement directed at news media, the army requested that journalists stay clear of deployed troops and not reveal their position “in order not to compromise the operation under way”.

The coup ended after one week with the restoration last Wednesday of the government, which formally disbanded the special unit during its first cabinet meeting following the putsch. Regular troops began disarming the RSP over the weekend.

The chief of staff said on Monday, however, that RSP officers were refusing to participate in the process and accused General Diendere of hindering the disarmament and of seeking support from foreign forces and Islamist militants.

Bassole had been considered among the favourites in a presidential election scheduled for Oct. 11, before he was banned from participating by the constitutional court.

The polls, which could now be delayed due to the coup, are meant to restore democratic rule in Burkina Faso a year after mass demonstrations forced Compaore from power as he attempted to extend his 27-year rule.

Diendere cited the court decision, which barred Bassole and other candidates due to their support for Compaore’s plan to change the constitution, as among the primary reasons for launching his coup attempt.

At least 11 people were killed and 271 injured during the coup as the presidential guard crushed protests against their actions.

The government has ordered an inquiry to determine who was responsible for the coup, and the state prosecutor on Saturday froze the accounts of Diendere and 13 others suspected of links to the putsch.

Compaore has been seeking medical treatment in Morocco but was due on Tuesday to fly to Ivory Coast, Burkina Faso’s southern neighbour.

Bayelsa Poll: Dickson gets certificate of return, PDP tips him for victory