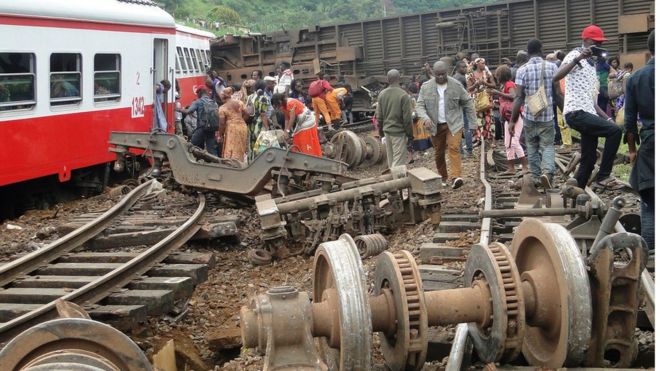 Death toll from the passenger train that derailed and overturned in Cameroon has hit 60, officials said on Saturday.

The 60 people were killed and nearly 600 injured when a packed train derailed between Cameroon’s two main cities.

Distraught relatives were seen as they desperately sought news of missing loved ones.

With the dead and injured scattered between different hospitals, authorities were working flat out to cope with the scale of the disaster.

At Yaounde’s main hospital, where the morgue was holding 29 bodies including those of babies, distraught relatives thronged the corridors.

The first person allowed into the morgue, a woman, emerged in tears. “She recognised the body of her sister,” explained one of the people with her.

The train, travelling from the capital Yaounde to the economic hub of Douala, came off the rails near the central city of Eseka at around midday on Friday.

“We have received between 60 and 70 bodies at the station this morning,” a railway official who asked not to be identified told AFP in Yaounde.

The train was crammed with people because a collapsed bridge had made travelling the same route by road impossible.

“Some of the wounded are arriving unconscious. We think the death toll will rise,” said the railway official.

On Friday evening, state-run television reported that many of the injured were in a critical condition.

Health minister Alim Garga Hayatou told AFP after visiting some of the injured that more information would be released “once we are in control of the whole situation”.

In the meantime hospital staff were “working hard and efficiently”, he added.

At Yaounde’s main hospital, the 29 bodies in the morgue included those of white people, many women and babies, a policeman on duty there said.

He had no information on nationalities although the French foreign ministry said one French national was among the dead.

One woman waiting her turn to enter the morgue said: “We have had no news from our sister since yesterday.

“We don’t know whether she is alive. Her phone was ringing yesterday but it wasn’t since this morning.

“Her husband is looking for her in Douala,” said the woman who gave her name as Fadimatou.

Dan Njoya said he had come to the morgue “to see if the body of my four-month-old baby is here”.

At another morgue, in Yaounde’s Ekounou neighbourhood, there was a list of 24 names: 11 women, six men including one Ugandan, one child and six babies.

Most of those injured in the accident were taken to hospitals in Douala, medical sources said.

Rail operator Camrail, a subsidiary of French investment group Bollore, said the cause of the crash was under investigation.

“Technical investigations are ongoing to determine the causes of this terrible accident and the findings as they become available will be made known,” it said in a statement.

The company was doing everything necessary to “deal with the injured and ensure support for the families affected by this tragedy”, it added.

Police had cordoned off the railway stations in both cities.

Meanwhile, the road bridge that collapsed on Thursday night as a result of heavy rain reopened to traffic in both directions on Saturday after emergency work.

The road is one of the busiest in the country and one of the main commercial routes in central Africa, carrying trade towards landlocked Chad and the Central African Republic.

Young married couple found mysteriously dead at home in US