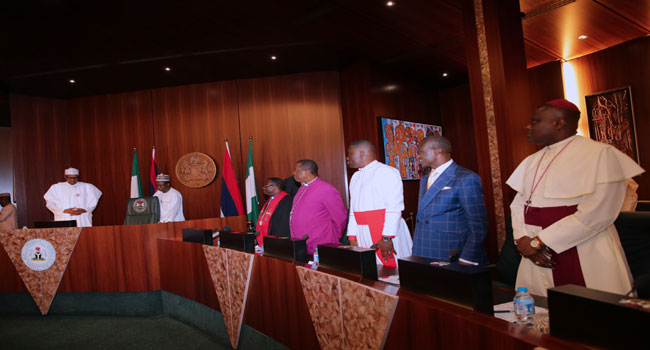 The Christian Association of Nigeria (CAN) has demanded Nigeria’s exit from all religious organisations.

CAN President, Reverend Samson Ayokunle, made the demand on Friday when he led a delegation from the association to the Presidential Villa in Abuja, the Federal Capital Territory.

Reverend Ayokunle, who briefed State House correspondents after the team met with President Muhammadu Buhari, said they asked the Federal Government to tackle herdsmen attacks in the country.

He said they also asked the government to step up its efforts in securing the lives and properties of the citizenry and recruit more policemen, as well as ensure the salaries of workers are paid.

Ayokunle, however, said they were humbled by the President’s frankness and would expect him to act now to preserve the sanctity of the country.

Sold Peter Obi’s Dollars: How Obiano Tried To Stop The Nation Newspaper From Exposing Him