CAN honours Wike Apostle of Peace, to Begin Ecclesiastical Courts 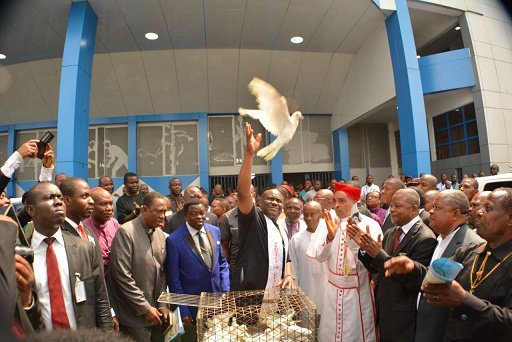 Rivers State Governor, Nyesom Ezenwo Wike has announced that the State Government  will  establish Ecclesiastical Courts to handle Christian matters across the state.

This is as the Christian Association of Nigeria, (CAN) Rivers State   performed the investiture  of Governor Nyesom Ezenwo Wike  as the  Rivers State  “Apostle of Peace ” for his commitment to peace and actions that have  made Rivers State one of the  most peaceful  states in the country.

Addressing Christians at the Civic Centre, Port Harcourt on Saturday   after his  investiture as the “Apostle of Peace ” during the Rivers State Peace Campaign organised by the Christian Association of Nigeria, Governor Wike  informed  that the State Government has already  submitted  the bill for the creation  of the  Ecclesiastical Courts  to the Rivers State House of Assembly.

He noted that Ecclesiastical Courts  will work alongside the Customary Courts to tackle issues directly affecting Christians in their daily lives.

The governor said: “Other states have courts that handle their different religious  issues. I want to reiterate that Rivers State  is purely a Christian State.

“Therefore, issues that  affect  Christians  must be tackled in legal ways that promote peace”.

He informed  that the Rivers State House of Assembly  has amended  the relevant law that permits the State Government to give grants to churches  to improve  the  facilities  in their schools.

Rivers State Chairman of the Christian Association of Nigeria, Most Rev Isaac Anyanasikike said that the State Peace Campaign is aimed  at consolidating the  gains  of peace in the state.

He lauded Governor Wike for building  peace  across the state through  his successful implementation  of the State Amnesty Programme and his support for the  security agencies.

Explaining  the reason behind the award of the “Apostle of Peace ” to Governor Wike, an official of Rivers CAN, Rev Dan Obinna declared that Governor Wike  has transformed  the state into one of the most peaceful states in the country.

He said though the governor  inherited a state where insecurity  reigned because  the  immediate past administration  closed the courts for  two years, incapacitated  the  Rivers State House of Assembly and destroyed the traditional rulers council.

He said immediately  Governor Wike took over he reinstated the institutions of Government  and started  the process of  empowerment  which has improved peace in the  state.

Highpoint of the event was the conferment on Governor Nyesom Ezenwo Wike, the award of the “Apostle of Peace ” by the State Chairman of CAN, Most Rev Isaac Anyanasikike supported by the Methodist Archbishop of Bishop, Most Rev Sunday Agwu, Anglican Bishop  of Evo Diocese, Most Rev Innocent Ordu and Pastor Ene Secondus.