Che Guevara: 50 Years of the Heroic Guerrilla – By Owei Lakemfa 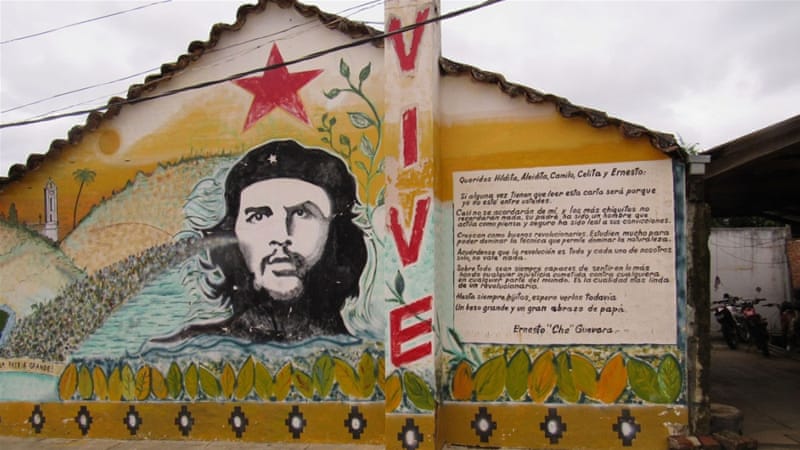 As parts of the universe this  Monday, October 9, marked the fiftieth year Ernesto Che Guevara was summarily executed in a classroom in  La Higuera, Bolivia, my mind was on three  romantic figures who gave their lives for the love of humanity; Jesus Christ, John Brown and Che.

Jesus is the epitome of love, care, peace, sacrifice  and calling the sinner to repentance. Che, who was not inclined to religion, and Brown who was quite religious, are the two primary figures I know who were Christ-like in their readiness to sacrifice their lives for the emancipation of the poor, the hopeless, the oppressed and the repressed.  The theme of love was central to their beliefs and actions.  Brown lived by Christ’s injunction: ‘Love Thy Neigbour As Thyself’.  For Che: “The true revolutionary is guided by a great feeling of love. It is impossible to think of a genuine revolutionary lacking this quality… We must strive every day so that this love of living humanity will be transformed into actual deeds, into acts that serve as examples, as a moving force.”

He admonished those who wish   to follow in his footsteps: “…try always to be able to feel deeply any injustice committed against any person in any part of the world. It is the most beautiful quality of a revolutionary.”

Jesus was accused of treason for allegedly calling himself the ‘King of the Jews” He was put through the  charade of a trial in the  Sanhedrin, the Jewish Court.  When he went   on  Appeal to the colonial Roman Governor, Pontius Pilate, he lost because the Jews voted that the robber, Barabbas, rather than he, the righteous, be  discharged and acquitted. Ultimately, he was nailed to the cross and died of his wounds.

Brown who followed in the footsteps of his Lord,  saw the image of Christ in the American slaves and the poor, and tried to emancipate  them through insurrection. On October 16, 1859 he attacked the American armoury at Harpers Ferry,  Jerfferson County, West Virginia, United States in order to secure arms for slaves, Blacks and their supporters  to overthrow  slavery.  He  lost ten of his followers including two of his sons; Watson and Oliver in the attack while he was arrested, tried and  hanged. In sacrificing his life and those of his sons,  Brown made an  atonement for the White Race; it is therefore difficult for any  Black person who reads the story of John Brown and his family, to be a racist.

Che, a young medical  doctor from Argentina decided on a life of revolution to remove tears from the faces of the poor, bring the oppressors to justice, remake the world and build a new humanity or  as he put it: “build the new man and woman.”   He was motivated by hatred for injustice, he wrote: “If you tremble with indignation at every injustice, then you are a comrade of mine.” He also taught people to stand by principles arguing that  it is “Better to die standing, than to live on your knees.”

Che went to Guatemala, stood by the elected Jacobo Arbenz government, and when it was overthrown on June 27, 1954 in an American-organized coup, he fled, convinced that  not elections, but revolution, will emancipate humanity. He journeyed to Mexico where he joined Cuban political exiles led by the Castro brothers; Fidel and Raul, returned with them to their country to carry out the 1959 Cuban Revolution in which  he led the rebel forces to seize  the capital, Havana.

With the successful Cuban Revolution, Che left to emancipate the poor and repressed in other countries.  Explaining his actions, he said: “We cannot be sure of having something to live for unless we are willing to die for it”  In battles, he was quite tactical, courageous, fearless and fearsome with a disdain for death. He was like a man who carried death in his pouch; ever ready to challenge it to a wrestling contest.  He  said: “Whenever death may surprise us,  it is  welcome provided our battle cry has reached even one receptive ear and another hand reaches out to take up our arms and keeps shooting.”  He was a citizen of the world and it did not matter to him under what sky he fell in battle. In a 1967 letter to the Tricontinental Solidarity Organisation in Havana, he wrote: “To die under the flag of Vietnam,  Venezuela,  Guatemala,  Laos,  Guinea,  Colombia,  Bolivia or  Brazil — to name only a few scenes of today’s armed struggle — would be equally glorious and desirable for an American, an Asian, an African, even an European.”

Che had it all in Cuba; he was an icon of the revolution,  was Governor of its Central Bank where he made famous its bank note by simply signing ‘Che’ which meant buddy or friend. He was a Minister, married, and had five children; Aleida, Hilda, Camilio, Cecilia and Ernesto. He left all these and the comfort of family, to live and fight in the jungles of the world for the poor and lowly.  He was in Africa to fight alongside   the followers of Patrice Lumumba against the puppet  dictatorship of General Joseph Mobutu Seseseko in the Democratic Republic of Congo. His last battle   was in the jungles of Bolivia where  on October 8, 1967  his team was out-gunned in a fire fight with the Bolivian  Army. With his leg riddled by bullets and his gun knocked off,  he shouted at  his captors: “Do not shoot! I am Che Guevara and I’m worth more to you alive than dead.”

Che  was considered too dangerous to be allowed a trial; the Bolivian government and its American advisers took a decision that he had to be executed. The next  morning when a Bolivian officer entered the classroom he was being held, Che told him: “I know you are here to kill me. Shoot, coward, you are only going to kill a man.” True to his words,  a man was killed, but a myth was born. The government   cut off Che’s  arms and buried  him in an unknown grave; but he became larger in death even without his remains  being discovered until 32 years later. Che who was 39 when he was executed, has become the ultimate and heroic guerrilla inspiring youths across generations; his youthfulness remains etched in the sub-consciousness of millions of youths across the world who don   his t-shirts, wear Che-like berets and carry his banners during protests.

Che is one of the historical figures of humanity  who may  never die; like  John Brown, hanged 108 years before his own execution, “His soul’s marching on”