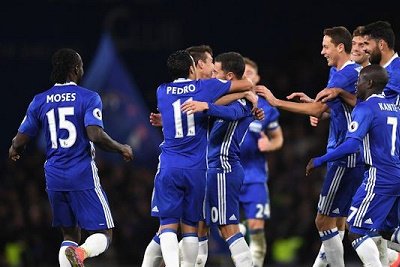 Chelsea FC caught fire on Bonfire Night as they trashed Everton 5-0 to move to the top of the Premier League table.

The familiar goal scoring pair of Eden Hazard and Diego Costa were joined by a new name.

Marcos Alsonso netted his maiden Chelsea goal as Everton were blown away in the first half at Stamford Bridge.

Hazard added another after the restart for his fifth goal in four league games and Pedro made it a wonderful tea-time feast for Chelsea’s front three when he added his name to the scoresheet.

Prior to today’s thumping, only Tottenham had conceded fewer Premier League goals this season than Everton’s eight.

And a lot of the football played by their conquerors today was lovely on the eye. Such was the overall dominance of this Chelsea display.

They did not allow the Merseysiders, sixth in the table, a single chance on goal worthy of the name.

Antonio Conte unsurprisingly retained the side that did so well in October.

Everton however did switch players around from their win against West Ham last Sunday, with Phil Jagielka, Tom Cleverley and goalkeeper Maarten Stekelenburg returning.

It did not work.

With October giving way to November, the immediate prelude to the game was preceded by seasonal fireworks and then the sides were led out by two Chelsea Pensioners.

A minute’s silence and a giant ‘Chelsea Remembers’ flag in the Matthew Harding End were also part of the marking of Remembrance at the Bridge today.

This game in the build-up to kick-off had the feel of a good test for how far Chelsea have come under Conte.

Three meetings with the Toffees last season yielded no Chelsea wins and three goals were conceded in the corresponding fixture with John Terry’s late, late goal needed to salvage a point.

Indeed the opening minutes today were pretty even, with David Luiz defending well when Romelu Lukaku went on his first attack, one of very few from our former striker.

The first big talking point came inside the first 10 minutes.

Seamus Coleman and Diego Costa have had coming-togethers in past meetings.

This time the Everton player’s boot followed through a challenge hard onto our striker’s ankle.

The impact of his studs resulted in a blooded sock when Diego Costa eventually had treatment but at the time of the impact, referee Robert Madley waved play on.

Yannick Bolasie did receive a yellow card for catching Victor Moses in similar fashion in the 15th minute.

Our right wing-back then directed a cross a little too close to Stekelenburg but the Blues were about to explode as brightly as the pre-game fireworks.

Hazard’s opener was one of his specialities – the run wide then cut back inside across the face of the defence.

But managing to pull the trigger at the perfect moment to find the bottom far corner of the net.

Matic had played his part in winning the ball back deep in midfield, and Pedro’s run in front of goal that had meant the Everton keeper could not react to the shot until late was also important.

Less than half-a-minute later it was 2-0. Pedro played his part again, this time with a ball across the box after Hazard had advanced through the middle.

Diego Costa rightly left the shot to Alonso who did not let the team down – hammering the goal through Stekelenburg’s legs.

The celebrations were those of a first-time scorer and such a good lead with only 20 minutes played.

Jagielka became the visitors’ second booking, for dissent, and almost gave Hazard a goal with a blind back-pass in a bad few minutes for the England defender.

And he would soon be playing in a reshaped defence with Koeman calling time early on the back-three he selected.

Attacker Kevin Mirallas came on for Bryan Oviedo with Ramiro Funes Mori moving to left-back in a 4-3-3.

Before then, Moses smashed a volley against the post from Alonso’s cross, the Spaniard having done very well to spot the space and run and pick out his opposite wing-back.

Everton’s change did not stem the blue tide.

Diego Costa must feel he should have scored when Hazard hammered a ball his way following a good Moses pass.

But he need not worry as from the corner that followed; he lashed Matic’s flick-on into the net when allowed space in the area.

It had shades of his opener against Leicester two home games earlier.

The Blues were able to head down the tunnel with our biggest half-time lead of the season so far.

And it would have been more had Diego Costa found the finish to match his and Pedro’s brilliant approach play moments before the whistle.

It never looked likely the goals would not keep coming as the second half began, such was the freedom and movement of the Chelsea attacking play.

And the fourth scored 10 minutes in was the pick of the day.

Hazard touched a Moses pass down the line and collected Pedro’s sublime back-heel before racing on and skimming the ball across the turf into the near bottom corner. 4-0.

The Everton keeper saved a bouncing Diego Costa volley just past the hour but when soon after he pushed out a Hazard shot, Pedro was there to side-foot in a goal he thoroughly deserved.

Oscar, on for Pedro, joined in the party with a wonderful pass with the outside of the boot to send Diego Costa away.

But the saving tackle came in from the Toffees. Stekelenburg tipped over David Luiz’s shot from the corner.

There were later attacks that threatened to add more but five goals without reply was enough for our best win of the season to date and plenty of smiles in SW6.

‘Antonio, Antonio,’ was frequently sung loud and clear by most inside Stamford Bridge tonight.

The late goal conceded by Manchester City against Middlesbrough in a 1-1 draw earlier in the day means Conte’s men are a point ahead at the top prior to Arsenal v Tottenham and Liverpool v Watford on Sunday.