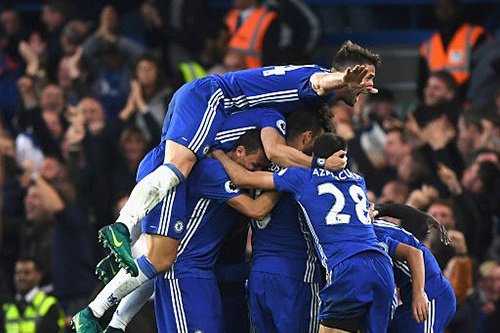 Jose Mourinho could be excused for a very sad demeanour after his new club, Manchester United suffered a devastating 4-0 at the hands of former club Chelsea.

Mourinho could not hide his frustration when Chelsea Coach Conte came to exchange pleasantries with him after the mauling was over.

With Sunday’s win, Chelsea moved up to fourth place in the Premier League table, while Man United wallow in the 7th position.

It was a superb display by Mourinho’s former wards as they  spoiled his  return to Stamford Bridge.

Chelsea had a perfect start at home when Pedro latched onto a long pass, took the ball around the advancing David De Gea and struck home.

With just 30 seconds into the match, it was the fastest Premier League goal for the season.

Zlatan Ibrahimovic nearflly got an equaliser when headed just over from an Antonio Valencia cross soon afterwards.

But Chelsea doubled their advantage on 21 minutes when defender Gary Cahill fired in when a loose ball from a corner that fell into his path.

United started to exert some pressure at the start of the second period.

Jesse Lingard’s shot had forced a good save from Thibaut Courtois but Chelsea soon regained control of the contest.

Kante’s goal was his first for the Blues, when he drifted through the United defence and slotted home with 20 minutes to go.

Courtois ensured his side kept a clean sheet when he produced two good saves late on from Ibrahimovic and substitute Marcos Rojo.

For the match, Mourinho only  made one change to the side that drew at Liverpool.

Jesse Lingard, who scored a stunning goal in this fixture last season, came in for Ashley Young in attack, with Mourinho sticking with the other 10 who began the 0-0 draw at Anfield.

Chris Smalling recovered from the knock he picked up in the 4-1 win over Fenerbahce on Thursday which forced him off at half-time.

Fellow defenders Daley Blind and Antonio Valencia were back in the starting line-up, as was midfielder Ander Herrera, after the trio were rested for the Europa League match.