Chibok Girls and Unanswered Questions [A Must read] 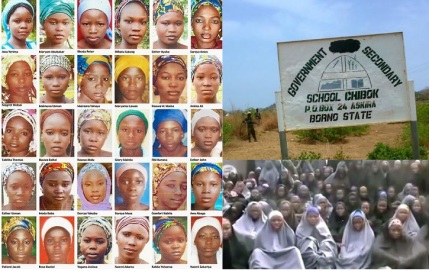 It is amongst the most deprived Local Government Areas in Borno State. The best roads in CLGA are glorified footpaths and those that lead to Chibok Village are forested on both sides thereby providing covers for Boko Haram Islamic Jihadists [BHIJ] to spring ambushes on motorists. Though Christians constitute over 80% of the population, only Muslims are appointed ‘Mai’ [Village/District Head] and ‘Maina’ [Prince] by the Shehu of Borno. Salaries of civil servants in CLGA and other LGAs in Christian-dominated southern Borno State are less than those of civil servants in northern Borno state dominated by Muslims.

Government Girls Secondary School: In mid 1970s, a Women Teachers College was established in Chibok Village but later converted to Government Girls Secondary School [GGSS] in 1988. The GGSS was upgraded to a mixed school in 2011 and it is the only secondary school in CLGA. Out of 530 students who allegedly registered for Senior Secondary School Examination [SSSE] in the school, 129 were from Chibok Village while the rest were from Warabe, Izge, Warabe, Lassa and Ashigshiya communities. Due to deteriorating security situation, the school was closed for four weeks before it was hurriedly reopened for the 2014 SSSE.

Transformation of BHIJ:  In the heat of bloody campaigns by BHIJ to make Nigeria ungovernable as promised by Hausa Fulani [HF] politicians, a bizarre drama was staged at Chibok Village. In October 2010, Alhaji Lawal Kaita said ‘we will make Nigeria ungovernable for Jonathan. Anything short of a northern president is tantamount to stealing our presidency. Jonathan has to go and he will go. Even if he uses the incumbency powers to get his nomination on the platform of the PDP, he will be frustrated out of office’. In furtherance of the Kaitas’ resolve to frustrate President Jonathan out of office, the BHIJ was transformed from a horde of misguided ‘bornthroways’ to a well-funded, bloodthirsty gang of murderers. The alleged abduction and failure of Jonathan’s administration to rescue the girls has become a sore thumb in our national life, hence, the need to revisit it with a view to asking some pertinent questions.

Conflicting Figures: On 17 April 2014, the Principal of the school, Hajiya Asabe Kwambura told Associated Press [AP] in an interview that 115 girls were abducted by BHIJ out of 129 who slept in the school that night. Then on 27 April 2014, the same Principal told Punch Newspaper [PN] in an interview that over 200 girls were abducted by BHIJ from the school that night while only 43 escaped. Following Governor Shettima’s pledge to pay compensations to parents/guardians of the girls, the villagers presented a list of 234 girls whom they claimed were abducted by BHIJ to the Governor when he visited Chibok Village in April 2014. They added that only 39 girls had so far escaped from BHIJ captivity.

In Maiduguri in May 2014, Borno State Commissioner for Education, Alhaji Inuwa Kubo informed the Presidential Facts Finding Committee on Chibok Abduction that 276 girls were abducted and that 57 of them later escaped, thereby leaving 219 still missing. In May 2014 Northern States Christians and Elders Forum released names and photographs of 178 girls whom it claimed were abducted from the school that night by BHIJ.

According to Mr Charles Eguridu, WAEC Head of National Office, 395 girls registered for the SSSE in the school. He added that after the alleged abduction, 189 out of the 395 girls were moved to Uba Examination Center to complete the SSSE. In view of the above given conflicting figures, how many girls were actually abducted from the GGSS, Chibok that night?

Complicity of School Authority: Some days to the alleged abduction, the Principal and Vice Principal who were Christians were replaced with Muslims, Hajiya Asabe Kwambura and Mallam Yerima Banjiri respectively by Borno State Ministry of Education. On 17 April 2015, Hajiya Kwambura told the AP that she was present when BHIJ came to evacuate the girls and that she even encouraged the girls to board the trucks because she thought BHIJ were Nigerian soldiers. She claimed that it was when BHIJ started looting and destroying things in the school that she knew they were BHIJ. She added that one soldier and a policeman who were deployed at the school were killed by the BHIJ and that her granddaughter was also abducted.

But on 27 April 2014, she told the PN that she was in Maiduguri for medical checkup when the abduction took place and that no security personnel was deployed in the school. She added that her daughter was not abducted. Which of the two versions given by Hajiya Kwambura is the truth? Why did Borno State Ministry of Education replace Christian Principal and Vice Principal with Muslims few days to the alleged abduction, considering the fact that over 80% of the students were Christians?

The Muslim Vice Principal threatened to expel any student who did not sleep in the school throughout the examination period. However, after the alleged abduction, he has not been seen or heard of. None of the daughters or wives of the teachers and management staff was abducted by BHIJ. Why did the Muslim Vice Principal insist that the girls must sleep in the school throughout the period of the examination? Why is it that the Muslim Vice Principal had not been seen since the alleged abduction? Why is it that none of the daughters or wives of teachers and management staff of the school was abducted by BHIJ that night?

Governor Kashim Shettima. Mr Charles Eguridu, WAEC Head of National Office said that WAEC prevailed on Dr Nyesom Wike, former Minister for Education, to write a letter to Governor Shettima, requesting him to move all students to Maiduguri, where adequate security could be provided for them during SSSE. He added that Shettima refused to relocate students of GGSS, Chibok to Maiduguri as suggested; rather, he replied in writing that his government would provide adequate security in the school throughout the period of the examination. But when the alleged abduction took place, there was no security personnel deployed anywhere in the school as he promised. Shettima has two daughters. Would he have refused to either relocate the students to Maiduguri or provide adequate security in the school as he promised if his daughters were amongst the girls?

Governor Shettima said that the military failed to protect the girls in spite of the fact that he gave them more than four hours of advance warning about the attack. He added that prominent indigenes of CLGA prevailed on him to allow the students to take the SSSE in GGSS, Chibok. But Mr Hosea Tsambido, Chairman of Kibaku Area Development Union, an umbrella union for Chibok people said that Shettima was economical with the truth because no indigene of Chibok prevailed on him to allow the SSSE to be conducted in GGSS, Chibok. If the military refused to confront BHIJ as inferred by Shettima, what instruction did Governor Shettima give to the security forces he promised to deploy in the school? What instruction did he give to the school authority that night in order to save the girls?

The mastermind of the bomb blast at a Church in Suleja that killed many Christians, Mr Kabiru Sokoto was apprehended in Governor Shettima’s Lodge in Abuja. This was after his escape from Police custody, where he was detained in connection with the bloody bomb blast at Suleja. Why did Mr Kabiru Sokoto, an indigene of Sokoto State, declared wanted by the Police find it convenient to take refuge in Governor Shettima’s Lodge in Abuja?

In May 2014, Shettima told the BBC that he knew a lot about the alleged abduction and that he was under pressure not to say all he knew about it because many heads would roll if he did. He added that the prevailing wanton destruction of lives and properties in North East by BHIJ were the handiwork of some powerful Nigerians who were bent on making life miserable for him at all cost. Who are the ‘powerful Nigerians’ Governor Shettima is prepared to sacrifice as many lives as possible in order to protect ‘their heads’? In spite of this open confession by Governor Shettima, why is it that no person or institution has made any effort to cause Shettima to speak the truth about the alleged abduction?

Female Students of GGSS, Chibok: Some of the girls who allegedly escaped from BHIJ captivity were interviewed by Al Jazeera and CNN Correspondents at various times but none of them could speak in English language. One of the girls claimed that BHIJ used only 2 trucks to convey them that night. If these girls were the real students in question, were they going to write SSSE in Hausa language? Is it possible to use only 2 trucks to successfully transport 234 girls and food stuff to Sambisa Forest which is about 60km from Chibok Village that night?

Obi Ezekwesili and the BringBackOurGirls

Led by supposedly educated Nigerians such as Obi Ezekwesili, the Bring Back Our Girls [BBOG] embarked on daily condemnation of the Jonathan’s Administration and the military for failing to rescue the girls. As far as the Ezekwesilis were concerned, Governor Shettima has no case to answer; hence they never made any attempt to question the circumstances surrounding the alleged abduction. Their primary objective was to use the alleged abduction to comprehensively denigrate Jonathan’s Administration and promote Buhari’s candidacy. Like Daniel Kanu and Arthur Nzeribe who used Youth Earnestly Yearn for Abacha and Association for a Better Nigeria respectively to sheepishly campaign for HF hegemonic agenda, Madam Obi Ezekwesili followed the inglorious footsteps of her kinsmen to use BBOG platform to campaign for the same purpose.

The Ezekwesilis’ campaign of calumny against GEJ was so helpful that Chief Audu Ogbe publicly acknowledged BBOG’s contributions at Eagle Square, Abuja in October 2014 during the Buhari’s declaration to re-contest. As expected, Madam Obi Ezekwesili and her cohort have run out of steam since the swearing in of Buhari on 29 May 2015. Now that the BBOG is a shadow of itself, has Buhari rescued the Chibok girls or was it a HF campaign outfit as acknowledged by Chief Audu Ogbe? In appreciation for BBOG’s support, a co-founder of BBOG, Hadiza Bala-Usman had since been appointed Chief of Staff and member of Buhari’s Anti-Corruption Advisory Committee by Mallam El-Rufai and Buhari respectively. Though Buhari seems to detest the Igbos with a passion, it is hoped that Madam Obi Ezekwesili’s loyalty to HF hegemonic agenda will convince him to find ‘something’ for her, however, small.

The 16 January Bravado: After the APC presidential campaign rally in Maiduguri on 16 January 2015, Buhari insisted on visiting Chibok Village. He reluctantly aborted the journey when he realized that the military was not prepared to provide security for the visit. If Buhari’s desire to visit Chibok Village that day was not a political grandstanding, why has he not visited Chibok Village or anywhere in North East in spite of the fact that BHIJ had killed over 1000 people in North East since 29 May 2015? Why has he not abandoned the comfort of Aso Rock Villa and relocated to North East to lead the battle against BHIJ from the front as he promised during the campaign? May God grant us the Grace to see with our eyes but not with our minds