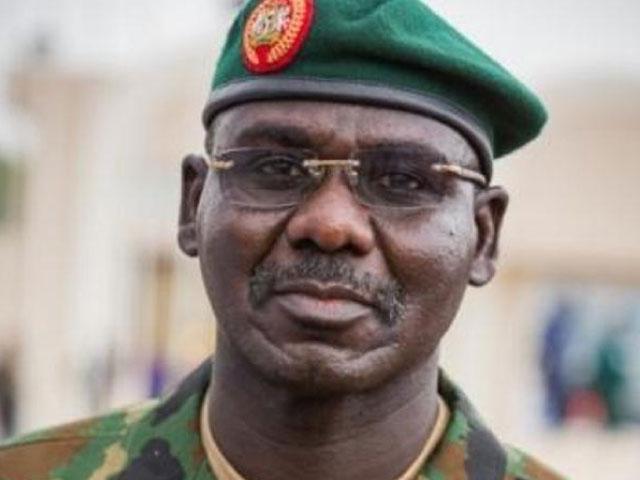 The Chief of Army Staff was received and conducted round troops’ deployment by the Commander 5 Brigade and the Commanding Officer of 243 Battalion.

The Chief of Army Staff while fielding questions from journalists that accompanied him, stated that he was there to see things for himself, assess the situation and give necessary directives.

Speaking further with the Commanders, he expressed dissatisfaction with the troops conduct and warned that such incident should not repeat itself.

He also called on the public especially those residing in the affected area to support and cooperate with the troops by exposing suspected Boko Haram terrorists that live among them.

Arms recovered from the attackers

He also stated that the recent wave of attacks by terrorists in Gulak and Gajigana should be seen as isolated cases that would not be allowed to repeat itself because adequate measures are being taken to deal decisively with the any of such occurrences.

He also assured that the military and the security agencies would continue to improve their performances.

He also warned troops to be more proactive and alive to their duties as everything is being done to support them.

It should also be noted that the recent attacks had every element of criminality; as such the people need to fully support the security agencies to finally defeat terrorism and criminality in our society.

Also on the entourage were representatives of Nigerian Security and Civil Defence Corps and the Nigerian Police attached to the Military Command and Control Centre.

It will be recalled that Boko Haram attacked our troop’s location in Gulak on Sunday which was repelled.

The troops are further pursuing the escaping terrorists and also exploiting to further block such kind of incursion through their blocking position.

The troops at Gajigana were attacked in which a soldier lost his life. The location have also been reinforced and the troops are now poised for any eventuality.

As we have entered the month of December, it is important to state that we have also entered a very critical part of the fight against terrorism and insurgency in our country.

The Nigerian Army wishes to reiterate its total commitment and determination to the war against the Boko Haram terrorists.

Consequently, it solicits for the continued support, cooperation and understanding of all Nigerians in this regard.