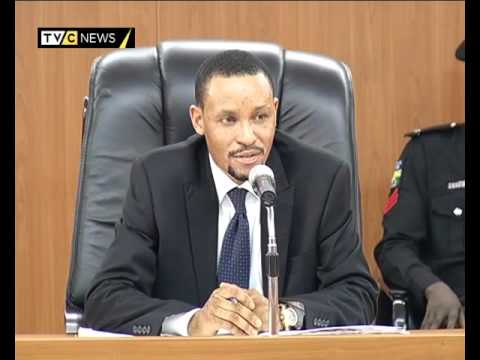 Worried about the rising high-profile cases in his office, the Chairman of the Code of Conduct Tribunal (CCT), Mr. Danladi Umar, has written to the Chief Justice of Nigeria [CJN], Justice Mahmud Mohammed demanding for more security around him.

The request was said to be sequel to the increasing number of sensitive cases involving politically exposed persons before the tribunal.

It was learnt that the application of Umar may be referred to both the Nigeria Police Force and other security agencies for necessary action. More cases involving some former governors and ministers were being awaited in CCT at the time of filing this report.

Investigation conducted by our correspondent indicated that the CCT judge sent a copy of the letter to the Department of State Security Service (DSS). It was gathered that Umar wrote the letter during the week as part of steps to overhaul his security apparatchik.

Although it was not obvious that the life of the judge was under threat, it was gathered that his mobile lines had come under intense pressure, leading to call restrictions. The judge was also said to have restricted his movement to his office and home in order to stave off influence.

A reliable source, who spoke in confidence with our correspondent, said: “The CCT judge has asked for security beef up in CCT, Umar’s office, home and around his family.

“The application has been submitted to the CJN for necessary contact with appropriate security agencies. I think the letter was just a pre-emptive step to guarantee adequate security for the judge in view of the increasing number of sensitive matters at the tribunal.

Responding to a question, the source said: “There is no threat to the tribunal so far, but Umar felt he needed more protection.” At press time, it was gathered that the DSS had been served a copy of Umar’s letter.

“Security agencies will debrief Umar on what he wants before taking action. What is certain is that there will be enhanced protection for him. The state will not ignore the request from the CCT chairman.”

Meanwhile, there were indications yesterday that more former governors and ministers will be arraigned before the CCT any moment from now.

Although the actual number of those on trial list could not be ascertained at the time of filing this report, a reliable source confirmed that “a sizable number of former office holders who refused, padded or hid their assets will be arraigned soon.

“The Code of Conduct Bureau has gone far in recommending these former office holders for trial and the signing of the necessary warrant is being awaited.

“As soon as the warrant is signed, we will release the names of those affected. But we do not want to prejudice the ongoing process.”

The constitution says: “Subject to the provision of this Constitution, every public officer shall within three months after the coming into force of this Code of Conduct or immediately after taking office and thereafter (a) at the end of every four years; and (b) at the end of his term of office, submit to the Code of Conduct Bureau a written declaration of all his properties, assets, and liabilities and those of his unmarried children under the age of eighteen years.

“The Bureau shall have power to receive declaration by public officers made under paragraph 12 of part 1 of the Fifth Schedule to this Constitution. Examine the declarations in accordance with the requirements of the Code of Conduct or any law.

“Retain custody of such declarations and make them available for inspection by any citizen of Nigeria on such terms and conditions as the National Assembly may prescribe. Ensure compliance with and, where appropriate, enforce the provisions of the Code of Conduct or any law relating thereto.

“Any statement in such declaration that is found to be false by any authority or person authorized in that behalf to verify it shall be deemed to be a breach of this Code.

“Any property or assets acquired by a public officer after any declaration required under this Constitution and which is not fairly attributable to income, gift, or loan approved by this Code shall be deemed to have been acquired in breach of this Code unless the contrary is proved.”

What do the Igbos really want? [Part 1] – By Emeka Odionu