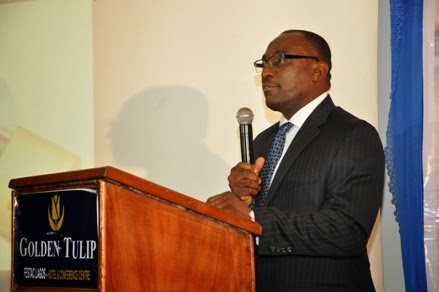 * Alleges witch-hunt by pirates against the DG*

Mr. Afam Ezekude [image above] by some unionists in which they called for his sack has been dismissed as politically tainted and are without substance in reality, according to a pro-democracy Non-Governmental organization – Human Rights Writers Association of Nigeria  (HURIWA ).

Indeed the Rights organization said rather than wage a meaningless media war against the current hierarchy of the Nigerian Copyright Commission which has secured several convictions in the competent courts of law, the Director General should be commended and given a Presidential award of excellence for the many landmark enforcement breakthroughs they have made since the year 2011 that the Nigerian Government appointed the current Director General who has begun his second tenured term in office only late last year.

HURIWA has noted the high profile interest that President Muhammadu Buhari has shown in matters concerning the protection of the copyrights and other professional rights of operators of the organized Nigerian Creative industry including writers and entertainers just as the Rights group has called on the President to keep a winning team which the Afam Ezekude-led management team represents.

HURIWA said the management of NCC should be commended for successfully achieving 210 convictions from 2011 till date under the current DG. The Rights group said that it is an impressive achievement for a commission to secure such a high number of quality convictions including the destruction of over N 72 million worth of pirated records confiscated from pirates even with limited operational fund.

HURIWA said it found out that those masquerading as labour union leaders within the Senior Civil service of the Federal Agency did not comply to the due process of the law by clandestinely nominating a few persons to head a union that hasn’t been properly introduced to the Senior Staff of the Nigerian Copyright Commission who by law must join the union on strictly individual and voluntary basis.

HURIWA stated thus: “The constitution of the Federal Republic of Nigeria 1999 is the highest binding laws of Nigeria. Any law, which is inconsistent with its provisions, is to the extent of the inconsistency null and void (section 1(3) of the constitution). Consequently, any provision of a labour law which is in conflict with the constitution is invalid. Section 40 guarantees the right of every person to form or belong to any trade union or any other association for the protection of his interest.

The Rights group further affirmed that: “Section 45 however permits derogation from this all important right in the interest of defense, public safety, public order, morality or public health or for the purposes of protection of the right and freedom of other persons. Trade disputes (essential services) Act and the Trade Union Act itself were made pursuant to section 45 of the Nigerian constitution.

In Chapter Two of the constitution which are invariably the fundamental objectives and directives principles of state policy, section 17 (3) deals with labour matters thus providing forth Opportunity for securing adequate means of livelihood; Just and humane conditions of work; Health, safety and welfare of all persons in employment; Equal pay for equal work without discrimination on any ground whatsoever; and prohibition of child and aged labour. Ironically, as legal experts have opined the provisions of section 17 are not enforceable because section 6(6) (c) of the constitution makes them non-justifiable.”

HURIWA recalled that the DG had clearly said the reason he is being vilified by the Association of Senior Civil Servants of Nigeria (ASCSN) is simply because he insisted and maintained that due process be followed in the formation of union within the Nigerian Copyright Commission(NCC). In other words, he insisted that in accordance with the law relating to unionizing a government agency, the ASCSN must provide the NCC with individually written and signed expression of interest to belong to the Association by interested members of staff of the Commission. The ASCSN being a Senior Staff Association, this is a pre-requisite under the law for membership of the Association and this is attested to by a number of judicial pronouncements from the National Industrial Court. To date, the NCC is still awaiting the requested information from the Association.

HURIWA also said Contrary to the misinformation by ASCSN, the Commission was represented at the meetings called by the Ministry of Labour but has always insisted that the needful must be done.  In addition, all staff of the Commission have duly and consistently being paid salaries through the Federal Government’s Integrated Payroll and Personnel Information System(IPPIS),  except few staff that have absented themselves from work for consecutive three months  now without any form of permission. HURIWA said evidence abound to establish the veracity of the due process which is in practice at the NCC.

“To the best of our knowledge based on empirical evidence made available to us, the Nigerian Copyright Commission (NCC) is not against union membership, but insists that due process must be followed. In fact, the NCC has taken steps to invite two other unions, sequel to their request, to make presentations/ properly brief the staff of the Commission, so that staff members can decide which union they want to join. These facts have been verified by us.

HURIWA said the Nigerian Copyright Commission (NCC) was established in August 1989 as the Nigerian Copyright Council by the Copyright Decree No.47 of 1988 now codified as Copyright Act (CAP. C28 Laws of the Federation of Nigeria 2004). Sequel to the copyright amendments of 1992 and 1999, the statutory mandate of the Commission was expanded to include the administration, enforcement, protection, promotion and regulation of copyright in Nigeria. But the commission didn’t do much up until the year 2011 when the current management came on board and introduced far reaching effective enforcement mechanisms which have comprehensively confronted and currently combating pirates.

Specifically, the Association of Senior Civil Servants of Nigeria has called on President Muhammadu Buhari to sack the Director-General of the Nigerian Copyrights Commission, Mr. Afam Ezekude, with immediate effect to save the organization from collapse.

The association, which was reacting to the alleged enslavement of workers by the DG, expressed shock that in the present 21st Century, Nigerians could be turned into slaves in their own country. But HURIWA dismissed these wild and unsubstantiated claims as not only spurious but dangerous and anti-intellectual.