The head of the religious sect that has been at the centre of the coronavirus outbreak in South Korea has apologised to the nation for the disease’s spread. 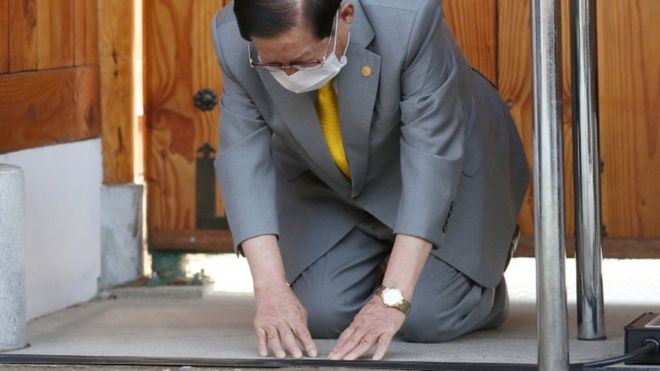 Lee Man-hee, the leader of the Shincheonji Church of Jesus, got on his knees and bowed at a news conference.

About 60% of the country’s more than 4,000 confirmed cases are sect members. Deaths nationwide now stand at 28.

Why is the Shincheonji Church of Jesus in the spotlight?

Members of the fringe Christian group are believed to have infected one another and then travelled around the country, apparently undetected. The group has been accused of keeping its members’ names secret, making it harder to track the outbreak.

Prosecutors in South Korea have been asked to investigate Mr Lee on possible charges of gross negligence.

“Although it was not intentional, many people have been infected,” said the 88-year-old leader. “We put our utmost efforts, but were unable to prevent it all.”

Of the confirmed cases, about 75% are from the southern city of Daegu and 73% of those have been linked to the Shincheonji Church.

China’s Wuhan to test ‘all residents’ amid return…

In the capital, Seoul, the mayor urged the city’s 10 million residents to work from home and to avoid crowded places.

But church spokesman Kim Shin-chang told the BBC they had provided a list of members, students, and buildings to authorities.

“We were worried about releasing this information because of the safety of our members,” Mr Kim said.

Mr Lee claims he is the second coming of Jesus Christ and identifies as “the promised pastor” mentioned in the Bible who will take 144,000 people to heaven with him.

The Shincheonji Church is labelled as a cult within South Korea and also in the Christian community, which results in the group often being discriminated against, persecuted or criticised, Mr Kim told the BBC.

Iran reported another 12 deaths on Monday, taking the total there to 66. They include Mohammad Mirmohammadi, a high-ranking adviser to the country’s Supreme Leader Ali Khamenei, Iranian media reported on Monday.

Fatalities globally have now passed the 3,000 mark, although the vast majority are in China, where the outbreak began.

Worldwide, there have been almost 90,000 confirmed cases, with the numbers outside China now growing faster than inside China.