The total number of coronavirus deaths in Spain has now exceeded 10,000.

The country, the second-worst hit in terms of deaths, has also lost nearly 900,000 jobs. The US on Thursday said it saw a record 6.6 million new unemployment benefit claims

The unemployment figures are another sign of the dire impact the pandemic is having on businesses in many countries.

Worldwide, confirmed coronavirus infections are nearing one million, according to Johns Hopkins University.

The university’s tracker has recorded more than 50,200 deaths globally; while more than 204,000 people have recovered.

What is the latest from Spain?

Covid-19 – the disease caused by coronavirus – has now claimed 10,003 lives in Spain as 950 new deaths were reported in the last 24 hours, the health ministry said.

The number of confirmed cases rose from 102,136 on Wednesday to 110,238, an 8% rise that is similar to the rate recorded in previous days. Authorities believe the virus is now peaking and say they expect to see a drop in figures in the days ahead.

“We continue with an increase of around 8%. This points, as we have already seen, to a stabilisation in the data that we’re registering,” María José Sierra, from the Spanish health ministry’s emergency co-ordination unit, said at a news conference.

This, she said, is resulting in an “important lowering” in the increase in the number of people being taken to intensive care units, already under pressure across the country.

March’s unemployment figure is the highest monthly jobless rise ever recorded in the country, which already had one of the eurozone’s highest jobless rates.

Spain banned all but essential outings and shut most businesses in mid-March.

The data shows 898,822 people have lost their jobs since the start of the lockdown, including about 550,000 temporary workers. Spain’s official unemployment figure rose to 3.5 million, the highest level since April 2017.

“This is an absolutely unprecedented situation,” Labour Minister Yolanda Díaz told a news conference. The tourism and construction sectors were the hardest hit.

The numbers come amid dire predictions about the possible economic impact of the measures imposed to fight the virus. A UN report estimated that up to 25 million jobs could be lost around the world. 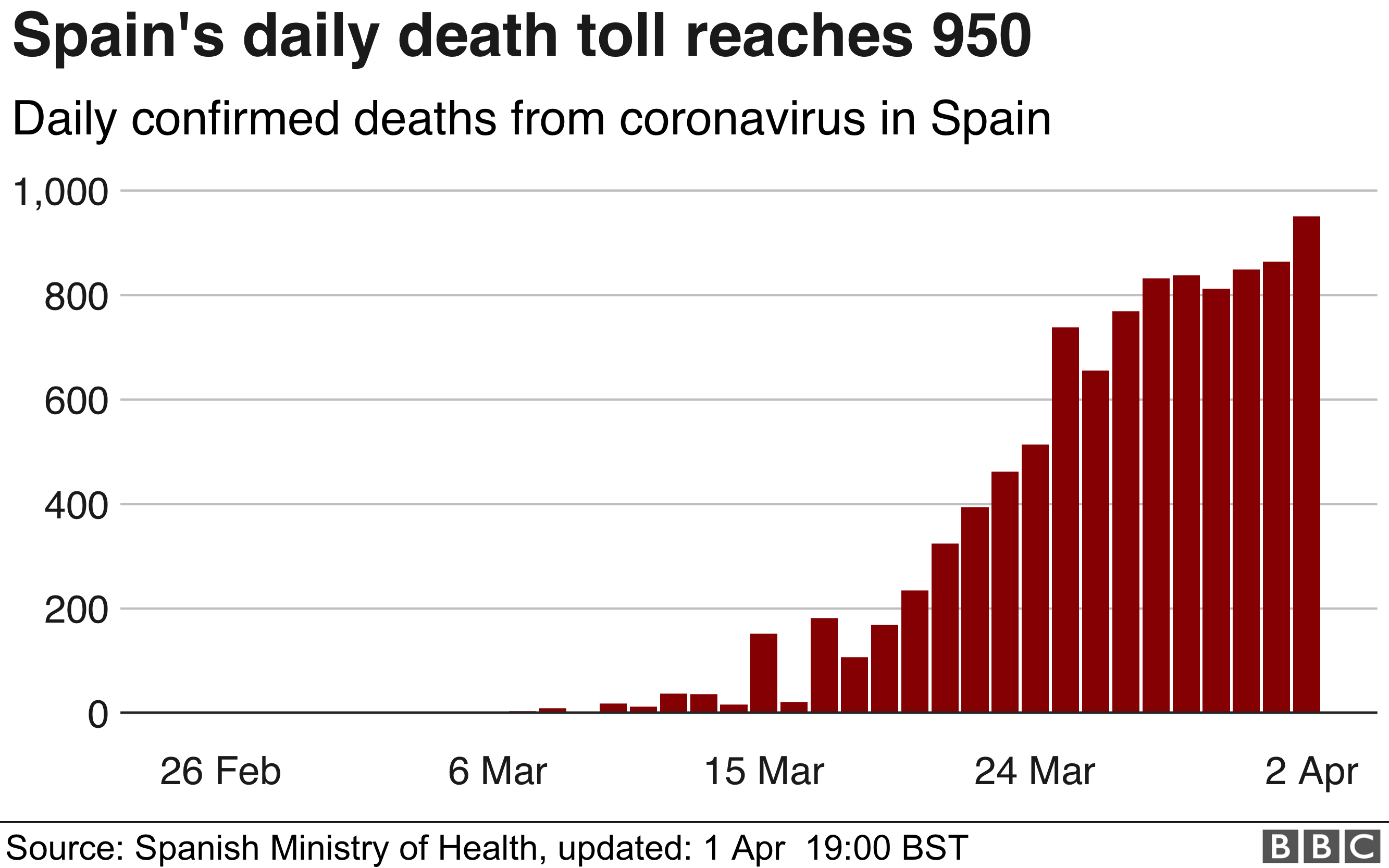 How bad are the US job figures?

The number of new claims for unemployment benefit filed in the week ending 28 March, 6.65 million, was double the previous week’s claims of 3.3 million, according to Labor Department figures.

The latest numbers were far higher than analysts’ expectations and reflect the growing impact of businesses forced to shut down as lockdowns are imposed in more US states.

The Labor Department’s report cited the impact across hospitality, manufacturing and retail.

There are fears that the number of jobless could reach 20 million, or 15% of the workforce – higher than during the Great Depression of the 1930s.

How else is the US affected?

More than 5,000 people have died in the US, including a six-week-old baby in Connecticut, believed to be the youngest American victim of the virus so far. Officials warned as many as 240,000 people could die in the US, even with the mitigation measures in place.

Confirmed infections across the US rose by more than 25,000 in one day. The worst-hit place is New York City, where nearly 47,500 people have tested positive and more than 1,300 have died, but new clusters are flaring up in places like Detroit and New Orleans.

Florida, Georgia and Mississippi have become the latest US states to issue lockdown orders. More than 75% of the country’s population have been ordered to stay at home.

What is the latest from Italy?

The country was the first in the West to impose stringent measures to curb the virus, and the government has warned of a “severe” recession.

On Thursday, Italy’s main business association said industrial output could fall up to 15% in the second quarter of the year. It already fell by the most since 2009 in the first three months of this year.

Germany’s Economy Minister Peter Altmaier warned the country’s gross domestic product (GDP) – the sum of the value of goods and services produced in the economy – could see a decline this year bigger than during the 2009 financial crisis.