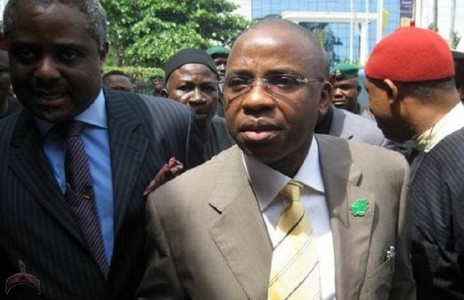 A prosecution witness has told Justice Adeniyi Ademola of the Federal High Court, Abuja that the Economic and Financial Crimes Commission, EFCC, received over five petitions against former Imo State governor, Ohakim Ikedia, who was arraigned on Wednesday, July 8, 2015 on a three-count charge bordering on money laundering.

Ohakim is alleged to have made a cash payment of $2, 290,000.00(Two Million, Two Hundred and Ninety Thousand Dollars), for a piece of land at Plot No. 1098 Cadastral Zone A04, Asokoro District, otherwise known as No.60, Kwame Nkurumah Street, Asokoro, Abuja.

While answering a question by the defence counsel, Awa Kalu, SAN, prosecution witness, Ishaya Dauda, said the Commission received over five petitions against the accused person.

Dauda, a Senior Detective Superintendent, SDS, with the EFCC, also told the court that some of the petitions against the accused person were received from the following sources: Alliance of Redemption and Destiny Organization; Aggrieved Imo State Citizens; Citizens for Imo Economic Security and 27 people (who are all signatories to a petition) from each of the 27 local governments in the state.

When asked by the defence counsel if he made any effort to confirm whether or not the groups were registered, Dauda said there was no need to do that.

Dauda further told the court, while answering a question by the defence counsel, that all the petitions were investigated.

However, when the defence counsel asked for copies of the petitions in court, the prosecution witness told the court that the petitions were in the Commission’s files.

‘‘My Lord, it is important we see the petitions because the liberty and freedom and of our client is at stake. Besides, we need to see the petitions so that we can cross-examine the witness thoroughly,’’ said the defence counsel.

However, the prosecution counsel, Festus Keyamo, raised an objection to the request, saying that the defence counsel had failed to do the proper thing as required by law.

According to Keyamo, ‘‘My Lord, in a criminal charge, you cannot ask a witness to present copies of petitions in court. It is wrong to harass or ambush a witness to present copies of petitions against an accused person in court. If you really needed them, you should have applied for them or told me. If you want them and you tell me, I will bring them.’’

The defence counsel then prayed the court to ask the prosecution witness to give him copies of the petitions.

Responding, Keyamo told the court that he would give copies of the petitions to the defence counsel within 24 hours.

In his ruling, Justice Ademola said the prosecution was right in his submission, adding that ‘‘If you (the defence counsel) needed them, as you do need them, you would have asked the prosecution to give them to you.’’

The case was adjourned to December 7, 2015 for continuation of trial.

Benefits of social media training to senators and their aides