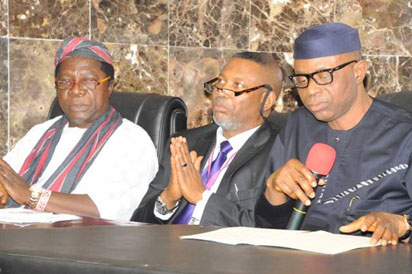 Governors elected on the platform of the Peoples Democratic Party (PDP) have asked the party’s Acting National Chairman, Prince Uche Secondus to step down.

The governors directed Secondus to hand over the leadership baton to the party’s National Secretary, Prof. Wale Oladipo in line with provisions of the party’s constitution.

In a communique issued at the end of a meeting in Abuja on Wednesday, the governors chided a former presidential adviser, Ahmed Gulak for what they described as his unacceptable conduct.

Ahmed Gulak had, on Wednesday, forcefully seized power at the party’s national secretariat conferring on himself the rights of the national chairman of the party.

He cited the court judgement of December 15, 2015, which sacked the acting chairman of PDP, Uche Secondus and gave him 14-days to vacate office.

Mr. Gulak said that more than 40 days after the court ruling, Mr. Secondus is yet to step down in line with the court decision.

An Abuja High Court has, on December 15, dismissed Chief Secondus from office following a suit filed by Mr. Gulak.

In his judgement, the presiding judge, Justice Hussein Baba-Yusuf held that the position of the Acting National Chairman of the party was zoned to the north-east, hence could not be occupied by Mr Secondus, who is from the south-south.

Justice Baba-Yusuf upheld the prayer of Mr Gulak that Mr Secondus was occupying the position of the Acting National Chairman of the party illegally.

He, therefore, ordered the Acting Chairman to vacate the office within 14 days.

Justice Baba-Yusuf noted that Secondus was from Rivers State, and not North-east geopolitical zone to which the PDP zoned the position.

He gave Secondus 14 days within which to vacate the office and directed that the plaintiff or any other party member worthy of that position should take Secondus’ place.