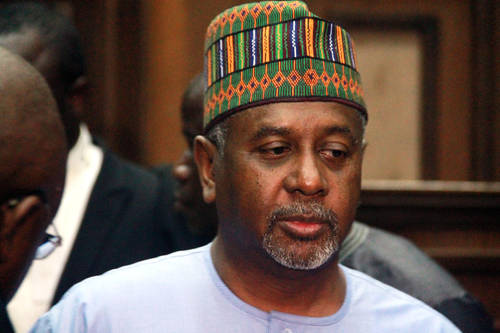 The adjournment is coming two months after the Ecowas Court granted him freedom and ordered the federal government to pay him compensation to the tune of N15 million.

Ecowas Court had, on October 4, 2016, ruled that Dasuki’s detention is illegal.

Recall that Dasuki has been granted bail by separate courts but was denied freedom by the President Muhammadu Buhari-led government.

Dasuki alongside Shuaibu Salisu, Aminu Baba Kusa, Acacia Limited and Reliance Referer Hospital are on trial for allegedly diverting the sum of $2.1bn meant for the procurement of arms.

The five defendants have since denied the charges and have been granted bail.

The court headed by Justice Baba Yusuf adjourned the case following the absence of Salisu Shuaibu, who was said to have taken ill and hospitalised.

Salisu was a former Director of Finance and Account (DFA) in the Office of the National Security Adviser (ONSA).

The counsel to Salisu, Oluwaleke Atolagbe prayed to the judge to adjourn the case as the trial could not proceed in the absence of Salisu.

Lawyers to other defendants did not object to the application for an adjournment since Salisu had always being present in court since the charge was filed against them.

Justice Baba Yusuf in his brief ruling, noted that since the charge was filed, the second defendant had never being absent in court and that for that reason the court is obliged to grant the request for the adjournment.

After consultations by the lawyers in the matter, January 25, 2017 was proposed and was endorsed by the Judge.

Meanwhile, the second charge referred from Justice Peter Affen to Justice Baba Yusuf was similarly adjourned to January 24, 2017 for mention.