December: A Month of Chaos – by Ephraim Elombah

Accidents usually increase because of increased vehicles on the roads. It is a season for transporters to make their living. 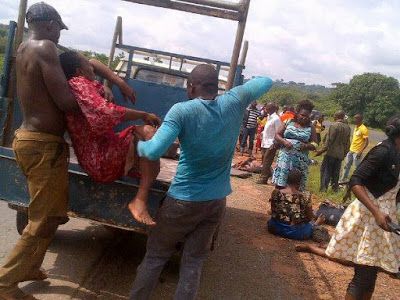 At least 10 people died on the spot and 15 sustained various degrees of injuries at Asaba Park Upper Iweka axis, Onitsha in a December acident

Once again, the month of December has come and gone. It is a month of increase in cost of living in Nigeria, a month that supposedly gets the highest transportation of the year.

December is a month that witnesses the highest rise in price of basic commodities including food items. Rice generally comes to mind. It is the food most consumed during occasions and festivities. It tastes good. Because of this, people like it most. When rice is cooked in the home, everyone’s appetite is whetted. A person who is sick often seeks to have rice cooked for him.

But is rice so nutritious that everyone likes it? People lack the indices. Not everyone is a lab technician that takes his product to the lab machine to determine its content. They rely on what the experts tell them. But experts fail to motivate the heart. Once a person has his heart fixed on something that is what he will do.

Rice is not the only food item which has its cost increase during the month of December. The demand and supply of substitute items are inter-related. When there is increase in price of a product, demand for substitutes will increase. As a result, these products will have their prices increase too. During festivities, people relax and enjoy what they have, leaving fewer hands to do work. This results in temporary scarcity of products and consequent increase in prices. Hence all food items rise in price during the festive month of December.

Apart from rice, drinks also increase in price to a noticeable extent. Because many people travel home to visit their loved ones, fewer hands are left to run restaurants and provision shops. Moreover these people are new at home where they don’t have any business doing.

The month of December supposedly witnesses the highest transportation. Many firms close up and grant holidays to their personnel and attendants. Students and pupils are given holidays. Civil servants are not left out. Teachers, bankers, the Local Government workers etc are all involved. Because of this, there is congestion in many of the highways in the cities.

More transportation means more demands for fuels. Hence, the price of fuel also goes up. Adding to the situation, station attendants also enjoy the festivities. Hence, some fuel stations close up leaving only a few in operations. The ones that are left in operation raise the price of this product beyond government approved rates and sell at exorbitant prices. Hence December witnesses increase in price of fuel in most parts of the country.

Because of the festivities associated with December, those who are less well to do increase in criminal behaviour. Hence burglary, snatching of property and kidnapping used to increase during the busy month of December. It is usually a time when various forms of criminal activities are on the rise.

Accidents usually increase because of increased vehicles on the roads. It is a season for transporters to make their living. Many a driver will sleep less especially those of long distance travels. They sleep less because there are many passengers waiting to be taken to their destinations. And once people see money, they may sacrifice the unimaginable in order to make it. Added to sleeping less, some drivers drink before driving and this tendency increases with availability of money because there are more passengers.

Church leaders and the news media tend to add to the chaos. They lead people into believing that this is the month when to celebrate the birth of their Lord as Christians are told. If anything they pay only a lips service when they tell people to be more careful for their lives and property during this time. They fail short of telling their members and other people to stop the frenzy. The twin celebrations of the Christmas and New Year drive people who are supposed celebrants of a dignified occasion into a frenzy. And church leaders idly stand by and watch the scene, if not actively urge their people on.

December is a month during which the unfortunate gets recorded. Incidents vary from thievery to accidents on the highways and to kidnapping. It is a time when cost of living soars. This is at best noticeable but least avoided. Every-body is made to suffer, both those who engage in the festivities and the few who refrain. The chaotic month of December is here again! Let us endure it.

The victims of unfortunate incidents will endure it. Others will enjoy it. Whether appropriate or not, we’ll all pass through the same ordeal. And it has gradually run its course. In just a little while, it’s all  past. Some will live with its aftermath for the rest of their lives. But its lessons will, as always, be lost to posterity. Until “thy Kingdom come,” we’ll not know which ones of our actions are good and which ones are not.

Nigeria’s anti-corruption war: Is the ‘Saint’ not Tainted?