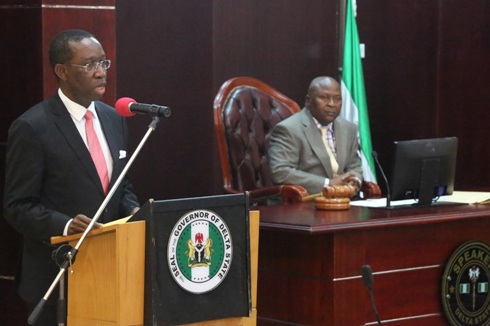 The Speaker of the Delta State House of Assembly, Rt. Hon Ovwigho Igbuya on Wednesday thanked the chairman and members of the State and National Assemblies Election Tribunal for satisfying the electorate and the society at large by dismissing the petition of the All Progressives Congress (APC) House of Assembly candidate, Chief Felix Anirah.

Speaking in Asaba, the speaker lauded the judiciary for not yielding to calculated lies about elections in Sapele.

He described the election of 11th April, 2015 as the most transparent ever seen in the history of the area.

“Elections are not won on the pages of newspapers or through noise making. Those banking their hopes on the judiciary to occupy space at the Delta State House of Assembly should stop deceiving themselves” he said.

Igbuya who described the petition as frivolous and gold- digging and its dismissal should be seen as victory for the people of Sapele State Constituency, which he represents at the Delta State House of Assembly, assured his constituents that he would remain focused.

“It is a victory for the people, our democracy and the rule of law”.

He thanked the good people of Sapele Local Government for their support while urging Anirah to join hands with him in attracting development to the area.

“We thank the Almighty God for our triumph at the tribunal. This victory is a call to greater service and sustained commitment to the good people of Delta State”.

Igbuya had defeated Anirah in the April 11 house of assembly election but the APC candidate rejected the result and approached the tribunal to have the election nullified.