Department of State Services, Dasuki and the Rule of Law 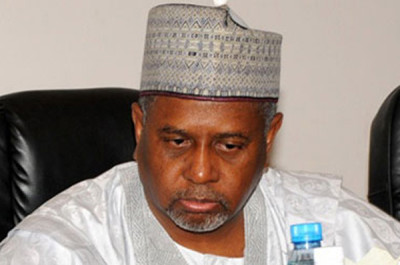 On November 3, 2015 Hon. Justice Adeniyi Ademola of the Federal High Court, Abuja granted leave to former National Security Adviser (NSA), Col. Sambo Dasuki (rtd) [pictured above] to travel to London for three weeks for medical treatment. The immediate past NSA is standing trial at the Federal High Court on charges of illegal possession of firearms and money laundering.

The Department of State Services (DSS) in response to the permission granted the accused person by the trial court invaded his home and prevented him from travelling out of the country as ordered by the court on the excuse that there are fresh allegations of crime against him.

On Friday November 13, 2015 the learned trial judge insisted that Dasuki be allowed to seek medical treatment in London and also summoned the Attorney General of the Federation (AGF) to appear before it on Monday 16th November, 2015 to explain why the order of the court granting leave to Col. Dasuki has been violated by the federal government. According to a report in the Vanguard Newspaper, Justice Ademola in summoning the AGF declared:

“Court orders must be obeyed. What is wrong in the defendant travelling and coming back to face trial?”

“Only a fit person can stand for trial and investigation. My own orders will not be flouted,” he added.

While it is true that the DSS has the statutory vires (power) to investigate and prosecute crimes, such power must be exercised conscientiously within the enabling legal framework. The DSS should not carry out its function in a manner that smacks of sheer impunity or derogates from the dictates of the Constitutionalism and the Rule of Law.

Irrespective of the gravity of the charges preferred against Col. Dasuki, no matter the nature of the fresh allegations levelled against him by the DSS, he is presumed innocent by Section 36 (5) of the Constitution of the Federal Republic of Nigeria 1999 (as amended) until he is proved guilty.

The Supreme Court in the landmark case of Director of SSS v. Olisa Agbakoba (1999) 3 NWLR (Pt.595) 340 deprecated the DSS for violating the right of a citizen to freedom of movement. Granted that Section 41 (2) (a) of the Constitution gives allowance to the security agencies to restrict the movement of any person on grounds of reasonable suspicion of commission of crime, it is my humble view that that allowance cannot avail the DSS in this instance since there is a positive and subsisting order of a court of competent jurisdiction granting leave to Dasuki to travel out of the country for medical treatment.

The essence of bail is for the accused person to be available to stand his trial and defend himself as only the living can stand trial. By law, bail is entirely a matter of discretion of the court. It was the court that granted Dasuki bail on the condition that he should deposit his international passport with the court and should not travel out of the country without the permission of the court. If the same court that granted him bail on that condition decides, as it did, to allow him travel abroad for medical treatment the DSS ought not to be discomfited in the circumstance.

The Supreme Court in the celebrated case of Governor of Lagos State v. Ojukwu (1986) All N.L.R 233 emphasised the need for the government to abide by court orders and respect the dictates of the Rule of Law as against the rule of force. The DSS by its action is trying to frustrate the order of the court granting leave to Dasuki to travel out of the country for medical treatment.

Such action in the lucid words of the late courageous jurist, Kayode Eso, JSC (as he then was) in the Ojukwu’s case cited supra amounts to “an attempt to infuse timidity into the court and operate a sabotage of the cherished rule of law”. Such attempt must be uncompromisingly resisted. If the courts could resist such attempt as it did in the Ojukwu’s case during the military era, there is clearly no reason why the order of a court should be scandalized and treated with levity under the present democratic dispensation.

Even if there are fresh tenable charges or allegations of crime against Dasuki, I am not persuaded that excusing him for three weeks for him to attend to his health will occasion hardship, injustice or irreparable damage to whatever actions the DSS intends to take against him. On the contrary, the DSS can effectively utilise the period of his absence to carry out further investigation into the fresh allegations and confront him with its findings upon his return to Nigeria. There is no apparent urgency to warrant inference with the positive order of the court.

The DSS and the country do not stand to lose anything if Dasuki travels abroad. The worst that can happen is for him to jump bail and refuse to return to Nigeria upon the expiration of the three weeks period granted him by the court. In such eventuality, there are ample provisions under the international legal system that could be employed to force him back to Nigeria.

Under the Mutual Legal Assistance Treaty entered into between Nigeria and the United Kingdom, any suspect can be extradited to either country upon request. Even if Dasuki were to escape from London to any other part of the globe, the International Police (Interpol) can track and bring him back to Nigeria to face and stand trial. The point here is that the DSS has absolutely nothing to fear.

The federal government should not by its action give room to avoidable insinuations that Dasuki is being persecuted or “witch-hunted” because of certain political considerations. Politics should never regulate the government’s attitude towards court orders.

Admittedly, Dasuki may have played a significant but distasteful role in the destruction of the country by the former administration of Goodluck Jonathan. However, it is important for the government to follow the due process of law in its quest to hold him accountable for his actions and inactions during his tenure as the NSA in the last administration.

The government should not resort to crude and dictatorial tactics in seeking justice. Jonathan’s administration may have been lawless. The Buhari’s administration was birthed with a solemn promise of change and rule of law. As such, the law should prevail in this case.

Inibehe Effiong is a Legal Practitioner and Convener of the Coalition of Human Rights Defenders (COHRD), inibehe.effiong@gmail.com