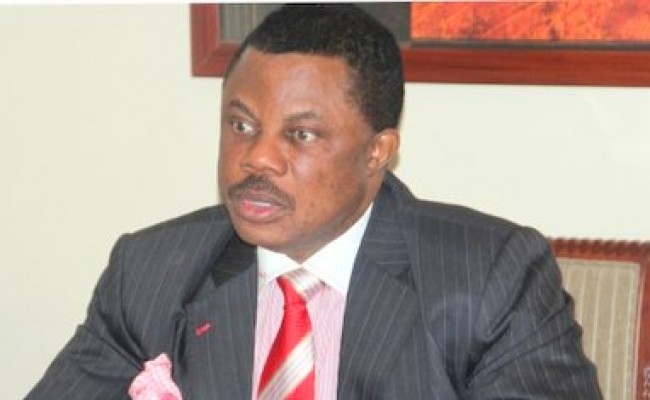 Citizens of Anambra state have started to ask serious questions as to reason for the prolonged unannounced foreign trip of Gov Willie Obiano.

Insider sources alleged that the dark glasses wearing chief executive had to rush overseas for a corrective surgery occasioned by the latest black eye he sustained for a record time from a fracas with Her Excellency over undisclosed issue.

The source also disclosed that the bad eye became an emergency issue immediately after the latest clash. It was learnt that the previous surgery on the left eye became worsened in the hands of madam again, as she was alleged to have hit Oga with the sharp pointed sole of one of her shoes.

This therefore damaged the eye gravely and he was advised for instant foreign medical trip for a corrective surgery if he must recover at least the 60% use of the eye.

Our source also disclosed that the frequent fights were actually the reason why Oga always use dark eye glasses both in the day and night, always.

For days, Awka Government Lodge close watchers pointed out that for months Oga’s life had been on tethers leading to his remarkable drop in weight.

Again, the bone of contention, the source disclosed was the fast approaching November 2017 governorship election. That the boss was painstakingly brooding over the way out of the acknowledged deluge of intensive pressures against his successful reelection bid, when madam badged in on him ranting over her own way forward, insisting it must be followed.

The argument now dovetailed into the choice of national chairman of their party. Things became so heated up that it reportedly pointed out that the presence of Oye has irredeemably ruined both the party and the administration by his incompetence, irresponsible behaviour and nonchalant attitude.

Again, it was reiterated that allowing the Bishop of Awka to single handedly pick the party’s national chairman, who was then sent to the Archbishop for ratification.

That it was reason why the recent leadership crises where Oye was floored in culpability was swept under the carpet while the few courageous National Working Committee members who really wanted to restore the party were sacrificed so as to silence any form of reason.

A Boost To Igbo Leadership By Hon. Abia Onyike