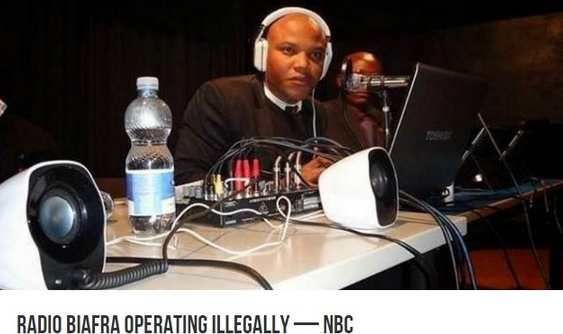 Department of State Security Service has arrested leader of the Indigenous People of Biafra (IPOB) and director of the Radio Biafra, Nnamdi Kanu.

The Radio Biafra director was arrested by DSS in a hotel along Lagos International Airport.

The statement issued on the official twitter handle of IPOB reads:

“Nigeria made the mistake of equating Biafra to Nnamdi Kanu. Muhammadu Buhari may have been ill-advised that arresting and unlawfully detaining Nnamdi Kanu will quench the fire of Biafra raging across the world. How mistaken they are.

“How can one stop such a raging wave that has ubiquitous structure across the world by arrest of a single man?

“Buhari and Nigeria inadvertently played into the grand strategy of Biafrans. Biafrans have waited for them to make this move. With the arrest of Nnamdi Kanu, Nigeria has given Biafran a perfect excuse to increase the agitation for their freedom. They have given reasons for so may world governments seeking to help Biafrans to wage into the matter!

“Similar to the unimaginable local and international free publicity of Radio Biafra by the Nigerian government when it unsuccessfully tried to shut down the daily broadcast from the Biafran freedom radio, the arrest of Nnamdi Kanu will escalate the Biafran restoration cause to unimaginable corners of the world.

“What else can demonstrate this to the international community, who the Biafrans have been wooing for a long time to turn to the aid of Biafrans, than the arrest of Kanu. Imagine the modern world where Alex Salmond can speak about the independence of Scotland from Britain without getting hounded not to talk of arrested. Imagine the Spanish government arresting Artur Mas for agitating for the independence of Catalonia? This is exactly what the Nigerian government has just done. The international community will clearly understand such message.

“No other example can clearly demonstrate the plight of Biafrans under the Nigerian government than the arrest of the leader of the Indigenous People of Biafra (IPOB) for seeking the liberation of his people.

“It is very laughable that Buhari who has failed to arrest the sponsors and leaders of Boko Haram terrorists group killing and maiming innocent people, prefered to go after Biafrans who are peacefully seeking freedom from oppression and injustice.

“Instead of dampening the Biafran spirit, Kanu’s arrest has intensified the passion and resoluteness of Biafrans.

“By the way it is way too late to arrest Nnamdi Kanu in order to stop Biafra. Kanu has virtually completed his work. He has laid the foundations for the restoration of Biafra. He has raised the conscience of Biafrans across the world. As it stands today there are a thousand and one Nnamdi Kanu who are able and willing to carry on.