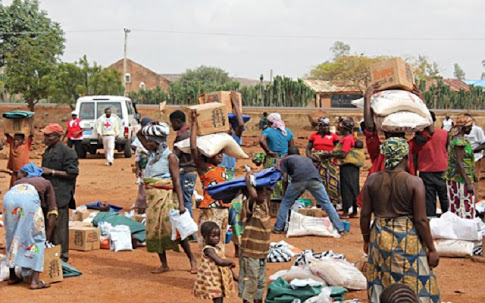 living in the remaining three Camps in Adamawa State have expressed gratitude to the Nigerian Government, state and other donor Agencies for providing both food and nonfood items, especially for the Eid-el-Kabir celebration.

Some of the IDPS among the three camps who spoke to our correspondent commended the effort of the National Emergency Management Agency [NEMA], under the leadership of the Camps Coordinator for the north east Comrade Sa’ad Bello.

According to them, the agency has provided them cows in each of the camps and new cotton materials among others.

When contacted, the north east NEMA camps coordinator Comrade Sa’ad Bello told this correspondent in Yola, that the gesture was aimed at showing concern to the condition they found themselves.

It is, as well, to assure them that the government, some Nigerians those that joined hands together and formed NGO’s, and also they too as staff of the agency made a lot of sacrifices out of their official assignment to ensure they are living in a good condition as every Nigerians.

According to the state coordinator of the NGO, Barr. Siyan Ibrahim, NEEDI is a group of young men who took it as a responsibility to contribute to and support the IDPS.

He commended NEMA and Red Cross among others for their support toward the success of the programme that took place at Malkohi Camp in Yola.

Comrade Chima Ubani may have died in vain – CLO