The New York real-estate tycoon outpaced his nearest rivals by more than 20 points.

“We love Nevada,” Trump told supporters at the Treasure Island casino on the Las Vegas Strip as he declared victory.

“The whole thing it’s going to be an amazing two months,” he added, referring to the next primary contests. “We might not even need the two months.”

Trump then quickly ran through a litany of his campaign proposals.

“We’re gonna get greedy for the United States,” he pledged. “We’re gonna bring in so much money, so much everything.”

Trump took about 47 percent of the vote, according to early returns.

Marco Rubio was pulling in 23.7 percent, and Ted Cruz was third with about 20 percent.

“The only campaign that can beat Donald Trump is this campaign,” said Cruz, who vowed to battle on.

Rubio was already campaigning in Michigan when the results came in. That state’s primary will be held on March 8.

Ben Carson, with just over 5 percent, was undeterred.

Most Nevada voters were looking for a political outsider to win the nomination, according to entrance polls. Of those voters, 70 percent preferred Trump. 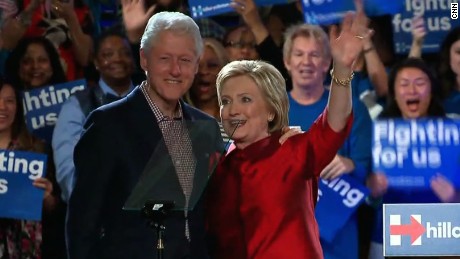 Meanwhile, according to Heraldstandard Hillary Clinton had, Saturday, February 20, won the Nevada Democratic caucuses, rebounding after a second-place finish to Bernie Sanders in New Hampshire.

The victory for the former secretary of state over the Vermont senator gives her two wins to one in the race for the Democratic nomination.

Clinton eked out a win in the Iowa caucuses before Sanders posted an overwhelming victory in New Hampshire’s primary.

Surveys of caucus-goers taken as they entered caucus sites showed that older women turned out in force to support Clinton, pushing her to victory despite her continued struggles to attract young women.

The competition heads next to South Carolina, which holds its Democratic primary next Saturday.

FG yet to pay judges January salaries, including chief justice