The head coach of the U-23 national team, Dream Team, Samson Siasia has selected Chile U-17 World Cup highest goal scorer Victor Osimhen and 20 other players to represent Nigeria at this month’s Africa U-23 Cup of Nations coming up in Senegal.

According to the list released by Coach Siasia in Banjul, after the team’s second friendly game against the Gambian U-20 national team, Baby Scorpions, the Chile revelation will be joined by captain of the team and Turkey based defensive midfielder Azubuike Okechukwu who is leading a list of 3 foreign professionals which includes Liverpool’s Taiwo Awoniyi and CS Sfaxien of Tunisia’s Ajayi Junior.

From the home front, the old reliables like Rangers of Enugu goal tender Emmanuel Daniel, Warri Wolves Oghenekaro Etebo, Bayelsa United’s Tonbara Tiongoli, Sincere Seth, Segun Oduduwa and Ndifreke Effiong were among the lucky ones, while there were some new faces like Seun Olulayo, Godspower Aniefiok, Kufre Ebong, Zaradeen Bello amongst others. 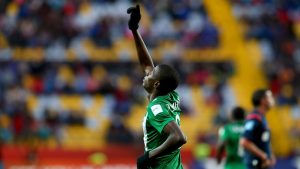 Addressing the dropped players, Coach Siasia told them not to feel discouraged at being dropped, but to see their dropping as a call for them to work harder for the Olympic Games proper of the team qualifies.

“I feel sad telling you guys to go, but the truth is that only 21 players will have to make the trip to Senegal, and these selected ones are those the technical crew have seen to be able to give us an Olympic ticket in Senegal, don’t feel discouraged, go back to your clubs and keep on working on your game, you will have your chance to be part of the team”

Meanwhile the Dream Team on Monday evening at the Brikama Boxbar Stadium was held to a 1-1 draw by the Gambian U-20 national team, the Baby Scorpions.

The encounter which was very explosive saw the Dream Team captained by Oghenekaro Etebo dominating the game from the blast of the referees whistle, but the resolute defense of the Baby Scorpions held their ground to ensure that the first half ended goalless.

On resumption of the second half, Coach Siasia brought in Victor Osimhen for Kufre Ebong, Bature Yaro for Usman Mohammed, Zaradeen Bello for Chizoba Amaefule, Junior Ajayi for Tonbara Tiongoli, these changes revved up the team as they took total control of the game to the admiration of all present and not long after scored goal through Stanley Dimgba, but the center referee ruled it off for what he termed infringement.

The Dream Team continued their dominance and in the 53rd minute, Godspower Aniefiok was fouled while he was goal bound by the Gambian goalkeeper and Captain Etebo converted from the spot to put the Dream Team ahead, some minutes later it was the turn of the Gambians to be gifted a penalty as Ndifreke Effiong handled the ball in his box and the resultant penalty was converted by Pa Omar Babou.

Impressed with the tough opposition presented by the Baby Scorpions, Coach Siasia requested for a rematch on Wednesday before the team departs for Senegal.

The team is expected to depart for Dakar, Senegal on Thursday 26th, November, while its first game will be coming up on the 29th against Algeria.