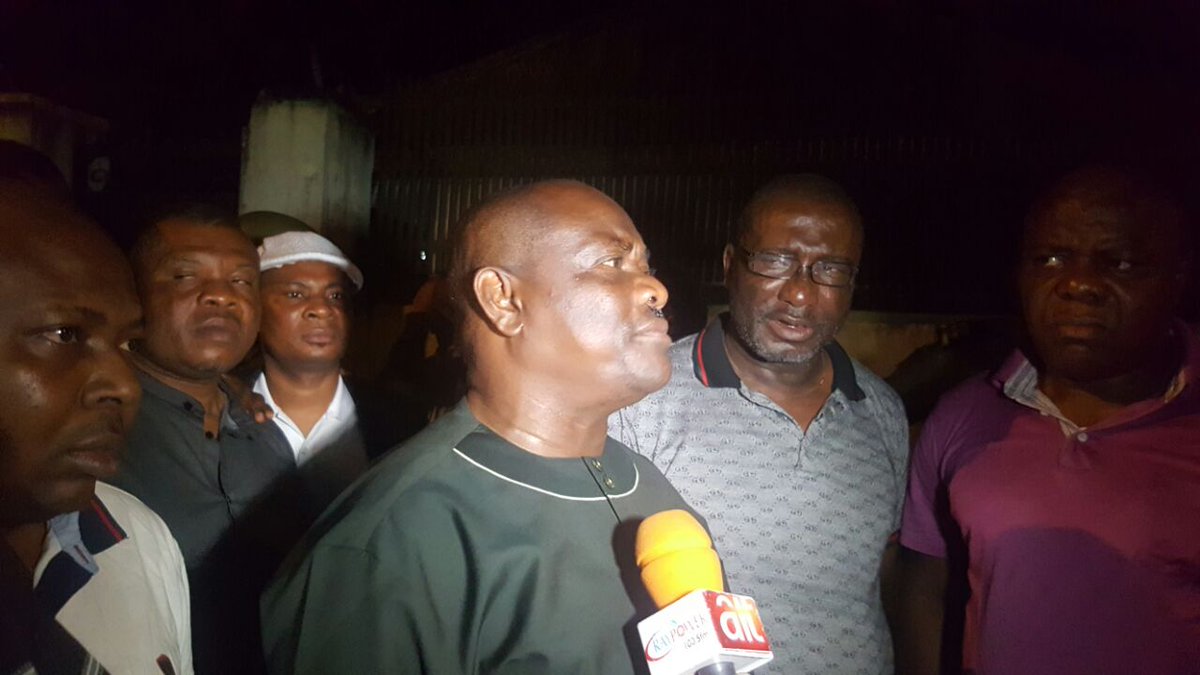 The ongoing crackdown on senior judges across the country will not end without the arrest of a judge attached to the Port Harcourt Division of the Federal High Court.

This information was received by PREMIUM TIMES, an online news media, late Sunday.

Sources at the Department of Security Services (DSS), said Mohammed Liman allegedly took bribes from Governor Nyesom Wike to give favourable judgment to the Ahmed Makarfi-led faction of the Peoples Democratic Party (PDP).

In a nationwide operation, scores of SSS operatives descended on the homes of senior judges between late Friday and Saturday, arresting seven of them after searching their residences.

The development sparked divergent reactions across the country, with some Nigerians and professional bodies condemning the raids.

Most of the critics said the raids were reminiscent of the dark military era which Nigerians assumed had ended with the return of democracy in 1999.

But an undaunted SSS in a statement Saturday said the nocturnal operation yielded recoveries of huge sums of money denominated in different currencies, including the U.S. dollars, euros and British pounds.

On Sunday evening, a top SSS official told PREMIUM TIMES that operatives were still tracking Mr. Liman and would ensure his arrest in the coming days after the initial attempt was thwarted by Mr. Wike.

Mr. Liman is among eight other judges being investigated apart from the seven arrested in the Friday night raids.

The source said Mr. Liman allegedly took bribes to subvert justice in the leadership tussle within the PDP which has left the party factionalised for several months.

Mr. Liman’s July ruling authenticated the Ahmed Makarfi faction‎ of the PDP which had been deemed illegal by Justice Okon Abang.

The PDP crisis culminated in another botched convention in August, although the opposing parties are currently working to end the quagmire.

“We received a petition that he (Mr. Liman) received bribes to give his ruling and our investigations confirmed it,” a top SSS official told PREMIUM TIMES.

The source added that Mr. Liman is “also a distributor” who receives bribes on behalf of other judges and helps distribute it.

“He travels across the border to Ghana, Republic of Benin and other West African countries to meet lawyers in hotels to take bribes for himself and his colleagues on the bench,” he said.

The source also said the amount involved in Mr. Liman’s botched arrest on Saturday morning was actually $2.5 million, and gave more explanation as to why operatives’ failed to arrest the judge or get the money.

“The vehicle that was used to cart away the $2million was faster than our men’s own,” the source said. “They just couldn’t catch up with them at such a high speed. It’s like chasing a 7-cylinder vehicle with a 3-cylinder.”

“We will arrest him in coming days; we have no doubt about this as we have enough evi‎dence to nail him in court. By bringing Governor Wike in, he has worsened his own case.”

But Governor Nyesom Wike whom the SSS blamed for interfering to frustrate the planned Friday night arrest of Mr. Liman, in a statement early Sunday dismissed the allegations as an attempt by the SSS to divert attention from its gross desecration of the constitution.‎

The SSS “concocted” the allegations to justify an “unconstitutional assault on the nation’s judiciary,” Mr. Wike said.

Mr. Wike said he didn’t know the judge, but he moved in to prevent him from being taken away because the mode of the SSS arrest did not comply with the dictates of the law.

“In the police, erring and corrupt policemen are first given orderly room trial, sacked and then appropriately prosecuted,” Mr. Wike said. “For judicial officers, the SSS has no role.”

“I am not in support of any judicial support being involved in corruption,” but “this impunity must stop.”

Justice Liman has also been quoted as denying the allegation against him.

“I’m not asking anybody to believe or disbelieve whether I stashed $2m, an amount that is equivalent to about N1b,” TheNigerianLawyer quoted the judge as saying in a statement.

“Perhaps you might think the SSS probably exaggerated the amount, but all these would have been relevant considerations if they had actually searched my house.

“If I had $2m or even a quarter of it I would have abandoned this horrible profession that has lost its dignity.

“In fact I have already lost interest in it and have made up my mind to say bye bye to it. I believe there is a life beyond every other thing.”

The Nigerian Bar Association, the umbrella organisation of lawyers, condemned the raids as an attempt to intimidate judges and demanded an immediate release of those arrested.

“We are in a democratic society and we cannot accept a situation where armed, masked SSS operatives invade homes of the justices of the Supreme Court and judges of our high courts.

“This is a ploy by the executive to intimidate the judiciary and we will not accept it. The NBA will not accept it. I want to emphasise again that we’re not under military rule and we cannot accept this Gestapo-style of operations.” Abubakar Mahmoud, NBA president, said Saturday.

But a senior lawyer, Femi Falana, said the action of the operatives was justified since the bar and the bench had allegedly failed to check corruption in the judiciary.

He called for the prompt trial of the arrested judges.‎

President Buhari also said on Sunday that the SSS did not flout the law in its arrest and detention of the judges.

“There is a convergence of views that the country has a corruption problem that needs to be corrected,” Mr. Buhari said in a statement signed by his media aide, Garba Shehu.

RE: Nigerian economy since 1999: myths, lies and data