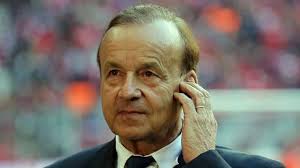 Super Eagles technical adviser, Gernot Rohr, has revealed that he has found new defenders who would help shore-up the team’s defence as the team gears up for its 2019 Nations Cup and World Cup 2018 qualifiers.

Rohr made this known during an interview in Gabon, where he is presently working as a television pundit at the on-going Africa Cup of Nations which Nigeria failed to qualify for.

“It is an interesting challenge to have a new team, young team and to build a team with players who really have the spirit of the country and want to play by giving their all, but don’t really bother about material things because they want to play for their country,” Rohr said.

“We have a good captain with experience and we have found some defenders to make us stronger at the back. I think the spirit and harmony of the team is very good, but we know the important times come now.”

Even though he didn’t reveal the names of the players he has added to the team’s defence, the Franco-German tactician had, few weeks back, confirmed that Dutch-Nigerian full-back Tyrone Ebuehi, would be one of the  players he would add to the team’s evolving formation.

He also revealed his frustration at the time it was taking needed to get a Nigerian passport for players born outside Nigeria, suggesting that he could be hinting at a plan which includes Russian-Nigerian defender Brian Idowu.

The duo could the additions he has been touting, based on the above statements, but in the coming days, the friendly against Senegal would go a long way in revealing more about his defensive additions and he plans to deploy them.

We can’t trace our families – Nigerians deported from U.K laments