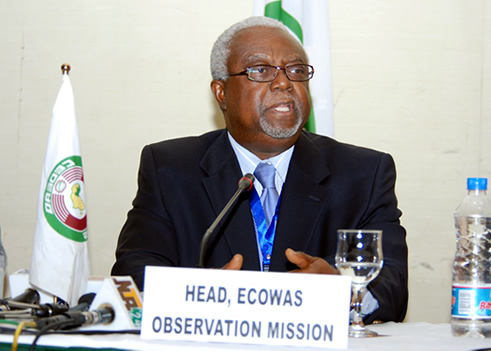 About 100 election observers from ECOWAS are participating in the presidential election in Guinea scheduled for the 11th of October 2015.

The ECOWAS election Mission personnel is made up of two teams of long term (15) and short term (85) observers. The former group is already on ground while batches of the latter are arriving the country.

Incumbent president Alpha Conde of the Rally of the Guinean People (RPG) is seeking a second and final term in office. He is being challenged by Cellou Dalein Diallo of the main opposition party, the Union of Democratic Forces of Guinea (UFDG).

Campaigns in Guinea which was thrown open on the 10th of September 2015 end on Friday October 9, 2015. Election Day offences include registration under a false name or by fraudulent means, destruction of any election materials, being in possession of an offensive weapon, delay of electoral process by violence or threat, and donations or gifts in cash or kind to influence votes.

The total number of registered voters for the October polls is 6, 042, 647 in 14,426 polling units (including diaspora voting). Voting is expected to be between 7 am to 6 pm on voting day(s). The eligibility criteria include that the voter must be a Guinean, be 18 years and above, must possess an electoral card while name must be on the voters register.

Under the watch of the ECOWAS Commissioner for Political Affairs, Peace and Security (PAPS) Dr. Slamatu Sulaiman, the ECOWAS observers Mission is being coordinated by the Director of Political Affairs Dr. Remi Ajibewa and Head, Elections Observations Technical Team Mr. Francis Oke.

Versed and experienced, Sawyer has over the years, led electoral observation missions for the African Union, ECOWAS and the National Democratic Institute in Mali, Sierra Leone, Ghana, and Nigeria, among others.

His overseeing of the Guinean election is by the invitation of the President of the ECOWAS Commission Kadré Désiré Ouedraogo.