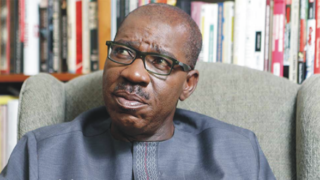 In the first round of the Edo governorship election results released Wednesday night, Godwin Obaseki, the candidate of the All Progressives Congress [APC] took the lead.

He won the first officially declared result for Ward 9 in Oredo local council, Benin, where collation of results has commenced.

Dr Olusola Ayanda, who declared the result for Ward Nine, said the APC candidate won 1,980 votes, while the PDP candidate, Osagie Ize-Iyamu got 1,833, indicative of a tight race in the ward.

Despite the high turnout of voters 4093 people voted out of the 13,765 registered.

The number of rejected votes was 283.

Apart from ward nine and seven won by the APC, the party also won wards five and 10,

Dr. Enoch Opeyemi of the Dept of Mathematics, University of Oye-Ekiti is presiding over the collation of the entire council at the Cultural Centre, Benin.

Only four party agents were present at the centre.

They represented the ACD, ACPN, APC and PDP.

However, the election appeared to be a tight race between the candidate of APC and the Peoples Democratic Party [PDP] flagbearer, Pastor Osagie Ize-Iyamu.

Early results from some wards in the state, which could not be authenticated by the Independent National Electoral Commission [INEC], indicated that the two candidates were running neck and neck in the poll.

The two main parties, however, claimed to have gained comfortable lead in the election while accusing each other of planning to rig the poll.

Unconfirmed results showed that the PDP won seven out of the eight units in Ward 3, Uromi in the Esan North-East Local Government Area.

Esan North East is the home of former chairman of the BoT of the PDP, Chief Tony Anenih.

Also, the APC lost in the polling unit of the National Chairman of the party, Chief John Odigie-Oyegun, where the PDP emerged victorious.

The APC, on its own, won in Ward 7 in the Oredo Local Government Area of the state.

Tinubu, Oyegun and the expensive tears of a godfather