Ekweremadu: How to end attacks by suspected herdsmen 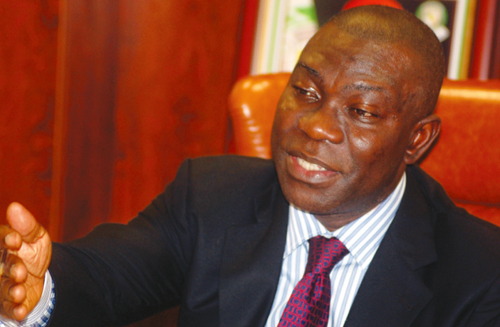 *Says restructuring the only way out for Nigeria’s progress

The Deputy President of the Senate, Senator Ike Ekweremadu, has once more, frowned at the incessant attacks in Igbo Land and some other parts of Nigeria by suspected herdsmen, and called on affected states to pass legislations restricting cattle rearing to modern ranches, while also setting up Forest Rangers to enforce such laws.

Similarly, he maintained that unless Nigeria was restructured, to make it more efficient and productive, it would be difficult for the country to wriggle out of security challenges, pervasive poverty, and retarded growth, as successive leaders would only be dealing with the symptoms, not the root causes of a festering illness.

Ekweremadu spoke at the weekend in New York, the United States of America, during the 2016 Convention of the World Igbo Congress (WIC).

He, however, said that while the country awaited the much-needed restructuring, the incessant havocs wrecked by suspected herdsmen was unacceptable because they had monumental socio-economic consequences on the nation.

The Senator commended the efforts of various state governments at managing the humanitarian crisis resulting from the attacks and ensuring there was no total breakdown of law and order.

He emphasised that every legitimate step must be taken to end the menace and avoid a dangerous situation where the people begin to resort to self-help.

He said: “Governments of various states in Igbo Land and indeed other parts of the country should immediately consider enacting legislations that confine cattle-rearing to modern ranches as obtainable in developed societies.

“In fact, our governments could go a step further to invest in constructing and leasing out modern ranches.

“This will produce healthier animals, give better products, provide employment, added value to the farm products, and help in promoting peaceful co-existence as well as sifting armed bandits and terrorists from real farmers doing legitimate business”.

Senator Ekweremadu, however, warned that enforcement of such measures should not be left entirely in the hands of the federal security agencies.

“Sadly, when you enact laws to checkmate the menace, as Ekiti State has commendably done, you will still rely on the same security institutions to enforce them.

“This is the dilemma.

“Therefore, our state governments should take further step by ensuring that such legislations provide for enforcement bodies, such as Forest Rangers.

“[These] will consistently comb the forests to ensure that those who run foul of the laws are arrested and speedily prosecuted to serve as deterrent to others”.

He regretted that “successive military regimes reneged on the core ingredients of a federal structure agreed upon by our founding fathers, at various constitutional conferences leading up to independence, as the basis of the Nigerian union”

He further stated: “Over the years, we have moved from a strong and viable three-regional federal structure to a weak, spendthrift, and unwieldy 36-state structure;

“We moved from a decentralised police system that allowed the federating units to take greater charge of security of life and property in their territories to a centralised police system in which one man at the centre pretends to be in full charge of security of lives and property in the creeks of the Niger Delta, the cocoa farms of the South West, the expansive land mass of the North, and the hinterlands of the South East.

“We also moved from fiscal federalism, which encouraged productivity and competitive development to a feeding bottle federalism that runs on free oil money, encouraging indolence, corruption, and lack of creativity in governance”.

“Now you can see why the cost of governance is so high; why states can no longer pay salaries;

“Why neither the federal government nor the federating units cared to invest, but lived off their allocations like lottery proceeds over the years;

“Why it is difficult for a state governor to sack rampaging suspected herdsmen; and,

“Why those who have the authority to call the security agencies to action to put a full stop to the menace may not be quick in their response”, he added.

Ekweremadu called on Ndigbo in the diaspora to join in shaping the ongoing debate on restructuring in Nigeria, because “it is at the heart of the forward-movement”.

He regretted that efforts and calls to restructure the country had always fallen on deaf ears because some people felt favoured by the current arrangement.

He insisted that the message should be continually passed that “he who pins another to the floor is also detaining himself”.

“With good faith and realistic restructuring, every part of Nigeria, Igbo Land inclusive, will explode in prosperity, the expected initial challenges notwithstanding;

“And the good thing is that we can set a timeline and adopt an incremental approach to allay unfounded fears and misgivings that have held us down”, he added.

Senator Ekweremadu commended the Igbo in the diaspora, especially the WIC for sustaining the Convention as a platform for rallying Igbo people towards restoring the social, economic, and political fortunes of Igbo Land in particular and Nigeria in general.

Special Adviser (Media) to Deputy President of the Senate

Ronaldinho returns to Barcelona as ambassador

Herdsmen attacks as man’s inhumanity to man – by Onwubiko