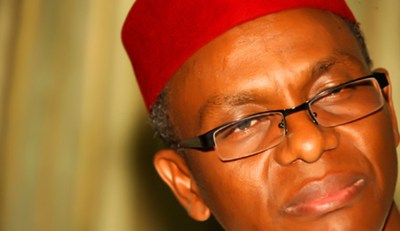 The president media forum of IMN, Ibrahim Musa said this in press release issued on Friday titled “KDSG Is Culpable Of Inciting And Executing Cleansing Of IMN Members”:

Kaduna state government yesterday 13/10/16 was reported to have issued a warning to residents in Kaduna and other towns not to take laws into their hands on any individual or group, in reference to the attacks, arson and destruction of properties of members of the Islamic Movement in Nigeria that occurred days earlier.

Clearly, this is nothing but an afterthought.

What happened in the wake of our peaceful Ashura mourning procession was a carefully planned plot, meticulously executed with all machinery of government.

The government had all along tried to give their brutal clampdown on Islamic Movement in Nigeria (IMN) members a semblance of an altercation between IMN and the masses.

Kaduna state governor, Nasiru El-Rufai alluded to this right from the outset of the attacks in December, 2015 in his infamous state-wide broadcast.

His utterances and body language since then left no one in doubt his disdain for IMN members.

Using all the tools of governance at his disposal, in private and openly, often in total disregard to reason, sanity or law, he exhibited extreme hate for IMN.

As a fore-runner to the latest brutality, he issued an executive order banning us from exercising our rights to practice our religion with a threat to jail anyone who does up to seven years in his jail.

For daring to mention that his order is in clear violation of all known sane laws of the land and beyond, he ordered the arrest and prosecution of Ibrahim Musa, the President of the Media Forum.

How then can El-Rufai now shed crocodile tears having incited violence on a people through his hate posture and actions against such people?

They read the body language of the government in their favour and acted based on that, and with full support of all the instruments of governance over which he presides.

We have it on record how certain individuals and hate preachers took to the media and the podium respectively calling on the masses to join the government of El-Rufai in what they termed an “all-out war on Shia.”

The government and El-Rufai has neither refuted that nor call the perpetrators to order or better still arrest and punish the culprits, since they are well known and the actions were done in broad daylight.

We wish to remind the public that incitement to murder a vulnerable population can be so subtle.

People read body languages, take cues, pick up signals and act accordingly. Other governors have quickly taken cue from him.

Plateau state has taken cue and similarly banned activities of IMN, attacked and torched lives and properties in the same fashion as El-Rufai. Kano, Katsina and Sokoto states are gearing up to follow in their footprints.

Unguarded utterances of political and traditional rulers, military and other security commanders as well as other hate preachers are on record and will be invaluable in due course at The Hague.

Let them be reminded that cases abound where leaders are held responsible through acts of commission or omission for crimes against humanity.

Post-election violence of 2001 is still being looked at by the Criminal Court.

Similarly, the Kenyan election violence case has been taken to the ICC, where those in authority are being tried because of the way they instigated the violence that led to the death of innocent people.

Ethnic cleansing of Bosnian Muslims and the Rwandan examples are still fresh in our minds.

The World is watching how he has been reckless in speech and actions leading to the deaths of hundreds of people, then he goes secretly burying in mass graves.

Finally, we will like to assure the public that after all this intimidation we will not be blackmailed into the path of violence.

Sheikh Zakzaky has been known to be an advocate of peaceful coexistence between people of diverse viewpoints.

We will not deviate from that path even though he is currently in illegal detention for the past ten months.

We call on the relevant authorities to as a matter of urgency to release our incarcerated leader, Sheikh Ibraheem Zakzaky and those in detention with him.

This, we believe will be a major step in doing justice to the victims of Zaria massacre of December 2015.

Buhari replies Aisha: You belong to my kitchen & bedroom

Nigerians attack Buhari for ‘Aisha belongs to my kitchen’ comment