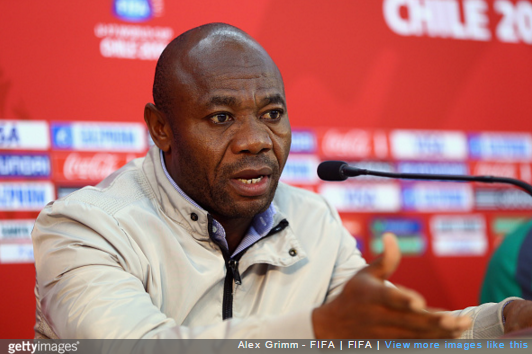 Former international Emmanuel Amuneke was the assistant coach when Nigeria won the U-17 World Cup trophy for a record fourth time in the United Arab Emirates in 2013.

Two years later Amuneke led Nigeria to a fifth U-17 title in Chile and, revered as a proven youth manager, he was swiftly promoted to coach the U-20 side the Flying Eagles.

Despite a promising start, Sudan shocked Nigeria in July to book their place at next year’s Under-20 Africa Cup of Nations, eliminating the defending champions on away goals.

Nigeria had already endured a torrid week after the players threatened to boycott the game over unpaid allowances and poor treatment.

“The team went through a tough time and in the end the boys battled oppositions on and off the pitch,” reflects Amuneke.

“The lack of support, motivation and basic things a team requires had its effect on the team – in the end the failure was inevitable.”

From the class of 94, only Daniel Amokachi from Nigeria’s golden generation is managing a professional club in Europe.

The former Everton forward is in charge of Finnish second-tier side JS Hercules.

Others like Stephen Keshi, Austin Eguavoen, Samson Siasia and Sunday Oliseh have all managed the Super Eagles.

Local media felt one of the country’s brightest managerial talents was set up for failure, while his critics insist he was just not good enough.

Now, having been unpaid for eight months and feeling disrespected by the Nigeria Football Federation – Amuneke is keen to ply his trade outside his native country.

Widely linked with Egypt’s Zamalek, Amuneke has cooled speculation linking him with the manager’s job at his former club but would relish a chance to manage the White Knight someday.

“For the past six years I’ve been engaged with the Nigerian youth teams to produce a new generation and I’m happy we’ve done that,” he told BBC Sport.

“I’m a coach that is open to every option, if I am opportune to go to Zamalek that will be a happy elevation but there is a man in charge at the moment.

“If I get a chance to work somewhere else in Africa that will be awesome, and if it’s in Europe – where I obtained all my coaching education – that will be a big boost for my career.

“I am open to any offers. In football you cannot limit yourself and wherever I get an offer I will evaluate it.”

But the 45-year-old forced his way into the consciousness of African football fans during the final of the 1994 Africa Cup of Nations in Tunisia.

He scored both his side’s goals as Nigeria beat Zambia 2-1 to secure their second African title.

He also played for the Super Eagles at the 1994 World Cup – scoring memorable goals against Bulgaria and Italy.

Two years after that triumph in Tunisia, he scored the winner again as Nigeria stunned Argentina 3-2 in the 1996 Olympic football final in Atlanta to become the first African football nation to win Olympic gold.

Winning the Confederation of African Football African Player of the Year award in 1994 and Olympic gold were supposed to be indicative of the long international career that beckoned.

But injuries put paid to that dream, as he made his last appearance for the Super Eagles in 2000 before obtaining his coaching badges with the Spanish Football Association at his home base in Santander.

“Of course everyone wants to be paid for doing their jobs, but when you are doing what you love the most – you don’t put money first,” he said.

“As a player I was passionate about the game and I am the same now in a coaching capacity.

“It took a while for me to decide to be a coach; I gave it a strong thought, evaluated it and decided it is something I could do.

“But in Africa the challenges are always there, a lot of stress, obstacles and factors that will hamper what you want to achieve.

“I’m grateful for the opportunity to play for Nigeria, to coach and for my achievements. But I’m aware that the journey is still far, I still have a long way to go as a coach.

“All I need to do now is to update myself, I’m aware that football is constantly changing. What is good today is outdated tomorrow.

“I just want to keep updating myself and hopefully when I get a chance to manage a team I will be able to express and transmit the ideas to the players.

“At the end of the day you want the players to perform the way you want them to play. For you to do that you must also be strongly knowledgeable.

“Football is changing from back when I played, with all due respect to the 1980s the game continues to change, and most of these players nowadays are well educated about the game.

“As a coach you must be at the top of your profession to give the players the preparations that will enable them perform at the top level.”